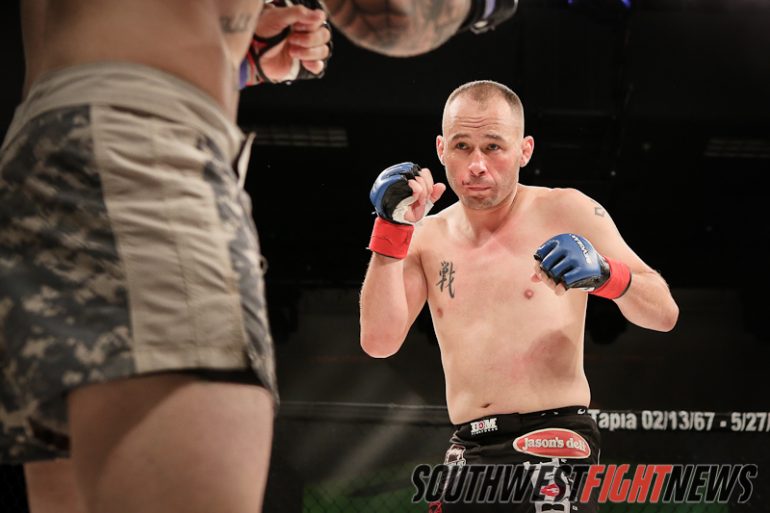 December will be starting out with a MMA bang tomorrow as the popular Jackson’s MMA Series will be invading Tingley Coliseum giving MMA fans the last major show of the year in New Mexico. The tenth installment of the series will feature so many interesting match ups that could potentially make for an epic night of fighting. SWFight.com broke down the nearly each match up this week and finally today we conclude with the main event of the evening.

The event will be a showcase bout that features two extremely talented bantamweight fighters. Representing the Jackson-Winklejohn camp, Matt Leyva (9-2 professional) will take on a formidable opponent in Anthony Birchak (8-1 professional) who will be making the drive down from APEX MMA in Arizona.

The local fighter Leyva, a former marine will make his second appearance inside a cage this year. His last fight was the Jackson’s MMA Series 8 where he wouldn’t allow his opponent out of the first round as he earned the technical stoppage over Michael Chupa late in the opening frame. It was Leyva’s fourth win in as many tries under the JMMA Series and the eighth fight ending before the judge’s scorecard out of nine career victories. With the high finishing percentage, Leyva remains one of the most dangerous fighters in the regional scene.

Representing the APEX MMA gym in Arizona, Birchak joins an impressive list of fighters that come from the popular gym. With teammates like Ultimate Fighter contestant Joey Rivera, UFC veteran George Roop, Jackson’s MMA Series veteran Freddie Lux and Bellator title contender Ed West it is no surprise that Birchak has emerged as a name to follow along his rise to the big leagues. Birchak has an impressive career record that only includes a single loss; of his eight wins Birchak has used the submission as his choice of fight ending methods five times.

The fight is being billed as a stylistic contrast as Birchak has the submission background and Leyva the bullying, ground and pounding style. However, throughout the sports history we have seen grapplers turn into kickboxers when they fight each other and kickboxers turn into grapplers when they meet up. Since there is not a way to predict what each fighter will do when the bell rings, it will be anyone’s guess all the way down to the seconds before the cage door closes.

The two are nearly mirror images of each other in the intangible categories as both have similar experience and records, similar paths traveled in the regional circuits and both fighters stand on the cusp of breaking into a larger promotion and audience. Both fighters will undoubtedly be hungry for the win, composed after lengthy careers full of tough fights and well prepared since they both come from top camps.

Bottom-line fight fans, this fight should be a barn burner.

The striking acumen of Mike Winklejohn students will always be dangerous as will the grappling games of APEX fighters so this fight may come down to which fighter has added more tools to their games. Leyva has shown a nasty top game so it may be Birchak’s best interest to put Leyva on his back, Birchak has shown a knack for submitting opponents so it may be wise of Leyva to keep the fight standing. Regardless, the execution of each fighters game plans and fighting to their strengths may be the deciding factor as to whose hand is raised at the conclusion of the fight.

This fight should be a great cap off and main event toJackson’s MMA Series X, stay tuned to SWFight.com for post fight coverage and results.