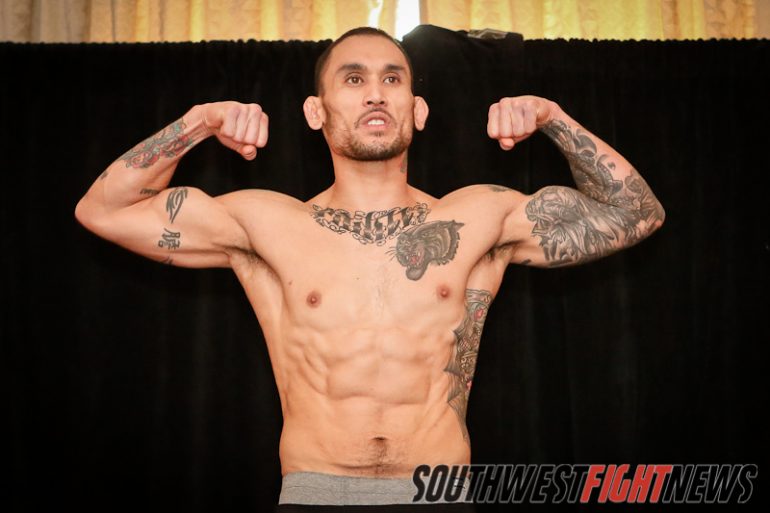 Peeking its head just around the corner, this weekend the Jackson’s MMA Series closes out 2012 with the tenth installment of the popular series. The event is slated to go down this Saturday, December 1st at Tingley Coliseum. If you have tuned into SWFight.com all week then you will already be familiar with all the amateur fighters featured in the under card of Saturday’s event. Today we are proud to breakdown the first two professional bouts that will kick start the main card.

Jackson-Winklejohn representative Mike Justus (1-1 professional) is quite the interesting fighter to breakdown to fight fans. Justus may be an afterthought to most casual fans and the hardcore fans of New Mexico’s regional scene may even have trouble remembering the name. With only two professional fights to his name, the lightweight fighter has not competed since September of 2010 and remarkably his other career fight was way back in 2006. Justus last saw cage time at Jackson’s MMA Series II where he would only need 90 seconds to lock in a fight ending triangle choke.

Manuel Cespedes (0-1 professional) is one of two “Cespedes” fighting on the card and in his first visit to the Jackson’s MMA Series he drew the assignment of being the opening fight in the main card against a local opponent. Cespedes has only competed once in his MMA career with his debut being in the WMMA organization in April of this year where he lost by an arm bar in under a minute. The Team Tompkins trained fighter will look to right the ships with an upset win over Justus.

This match up favors the Jackson-Winklejohn product as Justus is a very impressive kickboxer with solid ground work. While his lack of cage time in his two fight six year career, it is very difficult however to really get a gauge on the talent level of Justus. Saturday night will show whether Justus can shake off ring rust and whether or not Cespedes is hungry to get on the winning track, combinations like that tend to lead to exciting fights, not too mention Team Tompkins products tend to be extremely well prepared and talented athletes.

The second half of the Cespedes brothers’ will be the lighter in weight, Rolando Cespedes (2-1 professional) will take on Jackson-Winklejohn fighter Conrad Padilla (3-0 professional) in a featherweight bout. The two are even on pro fight experience and like his brother; Rolando will come from a camp that boasts talent and reputable martial artists.

Padilla is far from easy pickings as Cespedes will undoubtedly be faced with pressure and impressive wrestling not too mention improving stand up skills honed in while being with the Jackson-Winklejohn camp. He won his two first bouts by way of technical knock out and most recently fought at the MMA Fight Pit in Albuquerque, NM where he won a very tough unanimous decision. Padilla has shown his capability to fight for 15-minutes and end fights with his ground and pound.

Cespedes has fought heavier then the 145-pound weight limit in his career and may be the larger fighter come fight time, while the Tompkins gym is noted for their striking acumen, Cespedes has won via submission in both career victories showing that he is well rounded as well. He will be coming off a first round guillotine victory only a short four weeks ago.

This match up should be a fun one as both fighters are capable of success in all areas the fight may lead too, Padilla should find success like he typically has with his grappling game and it will be interesting to watch Cespedes attempt to execute whatever his game plan he heads in with.

Regardless of outcome, the Jackson’s MMA Series X should be yet another great night for the series. As always stay tuned to SWFight.com for more fight coverage and analysis and don’t forget to get down to Tingley Coliseum Saturday night!