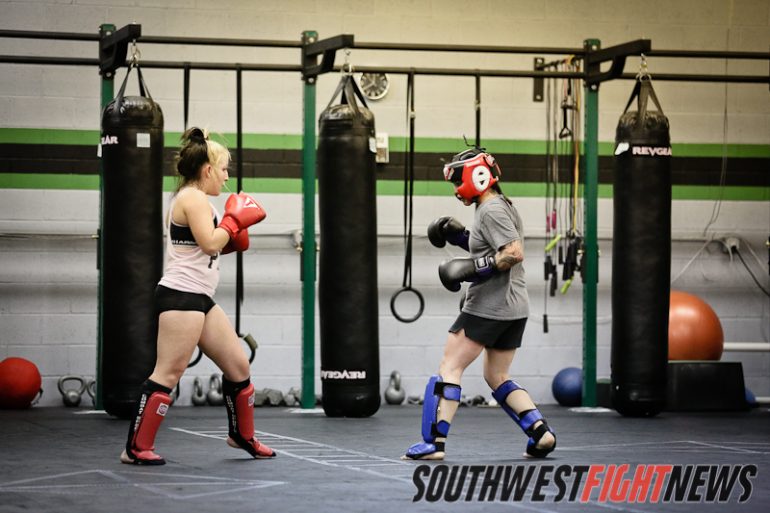 Identifying talent in the regional scene of mixed martial arts can be a difficult task as the talent pool changes often with the addition and subtraction of athletes and with the opportunities some receive and some others miss out on.

King of the Cage in New Mexico has always been home to both the unknown names, ready to make a name for themselves and the up and coming fighters looking to cement their place atop the prospects to watch list. On November 10th, King of the Cage will return to Buffalo Thunder Resort & Casino in Santa Fe, New Mexico to offer more of that opportunity and for one fighter it will mark a debut to mixed martial arts.

Amanda Lovato, of Judgment MMA in Rio Rancho will be making her first walk down to cage to compete in an amateur mixed martial arts bout in the Buffalo Thunder Resort & Casino. At 21-years of age, Lovato will bring with her a healthy dosage of kickboxing and boxing experience.

Lovato’s mixed martial arts training began in California, before her subsequent move to New Mexico in her senior year of high school in 2009. Starting with Kajukenbo, which is in simplest terms a hybrid martial arts that roots stem in self defense, she would eventually find her way to Scott Marlowe in December of 2011.

While training with Marlowe and the Judgement team, Lovato has fought in multiple smokers in both boxing and kickboxing. She has harnessed the experience of the stand-up game and signing up for MMA has led her to focus on grappling with the gyms grappling coaches, Randy La-Su Rogers and Rich Chavez.

Lovato, will find herself inside the cage in just under a week fighting for the King of the Cage promotion which has featured many New Mexicans making their professional and amateur debuts over the years. Saturday’s King of the Cage card is titled “Final Countdown” and will conclude the promotion’s events for 2012.

Fighting at a weight of 110-pounds, she will face off against a Colorado native who has slightly more experience than her. Lovato, will join teammate Adrian Cruz, in representing the Judgement MMA & Fitness gym in the evening’s event.

When observing the style Lovato possesses, it is not surprising to think of her transition into mixed martial arts being a smooth one. She is an aggressive striker that pushes the action to put her opponents on their heels.

Training with Marlowe ensures that crisp punches and kicks are plenty in her striking arsenal and in regional amateur MMA, those weapons can be lethal as technical skills can make all the difference when fights turn into brawls.

While catching up with Lovato, SWFight.com was surprised to learn about the busy schedule that Lovato endures to still find time to train. With a busy personal life that consists of going to school full time and working a stable job, it is admirable that there is time to be inside the gym. With that sort of busy schedule, it is remarkable she remains so intently focused on accomplishing goals such as competing in her debut MMA bout.

The staff here at SWFight.com sends our best wishes to her in her upcoming endeavor and fight fans be sure to stay tuned for more King of the Cage coverage and results for Lovato’s fight.

Make sure to check out the Awakening website (http://www.awakeningfighters.com/) to check out a destination that focuses solely on the ladies of combat sports. Included on the site, Amanda Lovato’s very own profile (http://www.awakeningfighters.com/athletes/amanda-lovato/). The database of women athletes is quite extensive, very informative and quite useful.