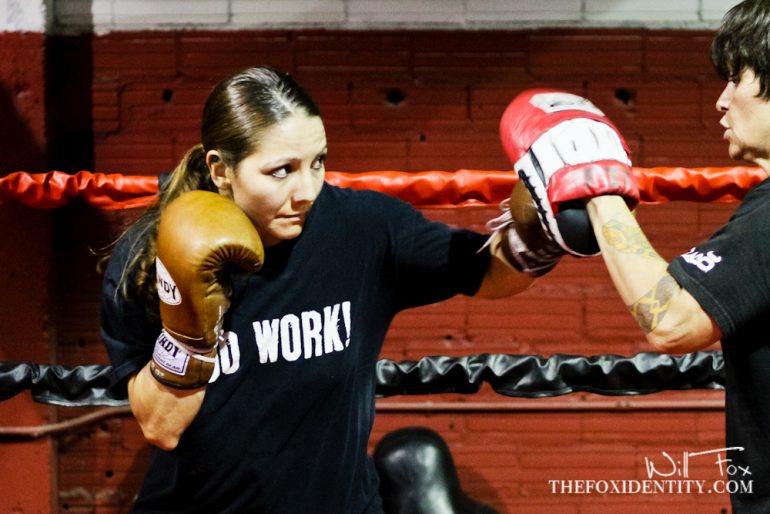 Brenda Gonzales King of the Cage

On Saturday night, FIT NHB‘s Brenda Gonzales (3-0) will be making the first defense of her King of the Cage Junior Flyweight title at the Ute Mountain Casino in Towaoc, Colorado against Elsie Zwicker (6-4). The fight will be headlining the final King of the Cage card of the year, “Battlegrounds”.

Zwicker will be the most experienced fighter Gonzales has ever faced and will have the advantage of fighting less than a fifteen minute drive from her hometown for the third consecutive time. The streak includes a victory in her last contest to claim a King of the Cage “Super Fight” title.

“I’ll be expecting a lot of boos,” says Gonzales of the partisan crowd that is expected Saturday night. “I am excited, it’s like extra movitation. It makes me smile.”

It was this past October that Gonzales claimed her own title against Sarah Alpar in Oklahoma. The feat was an impressive one for Gonzales, as she was coming off of a six month layoff from MMA and her opponent was coming off an upset victory over MMA and boxing veteran Monica Lovato. It was also the first time Gonzales would be fighting at the junior flyweight limit of 125lbs.

Alongside Gonzales, for most of the training has been her fiancé and former King of the Cage Lightweight and Junior Welterweight champion Tim Means, who himself is preparing for a third fight at lightweight with the UFC December 9th in Seattle, Washington.

With respective fights just a week apart, training for both is coming down to the wire.

“We do push each other and there times when we are both a little edgy and we snap on each other ,” says Gonzales of the two fighters training together. “But we keep on the diet together we go on our runs together; it’s a good thing.”

After her fight against Alpar, win or lose Gonzales will only have a few days of rest before she heads out to Seattle to see Means on the UFC on Fox 5 card.

This is the closest the two have fought relative to time since May of 2011, when Gonzales made her professional debut at the Buffalo Thunder and Resort Casino and in the main event of the evening was Means defending his Junior Welterweight title.

The two are also professional boxers with a record of two win and zero defeats for Gonzales and two wins with one loss for Means.

After attending a local boxing event in Albuquerque recently Gonzales, who has not been in the ring since June of 2011 says that she plans to continue boxing despite having a title with the KOTC promotion.

Since becoming a couple four years ago, Gonzales and Means sport a fascinating combined combat sports record of 22-1-1 along with the three championships.