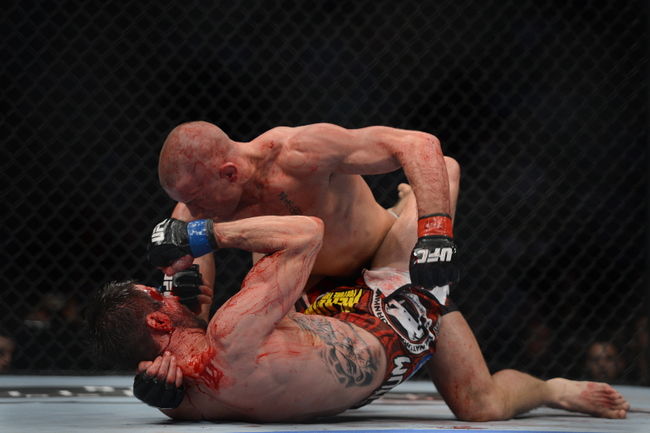 On Saturday night, at the Bell Centre in Montreal, Quebec, Canada UFC Welterweight champion Georges St-Pierre (23-2) out grappled the interim champion Carlos Condit (28-6) to a five round unanimous decision victory.

Over 19,000 MMA fans packed the Bell Centre in St-Pierre’s hometown for UFC 154. To say the contest was a “home-court” advantage for St-Pierre is an understatement.

A chorus of boos greeted Condit as he made his way to the octagon to his traditional choice of ring entrance music from Rage Against the Machine. In contrast, deafening screams and cheers welcomed St. Pierre back from his 567 days of inactivity due to an ACL injury.

The two humble fighters would exchange everything but pleasantries in the octagon.

From the initial round the Montreal native St-Pierre, was able to almost at will takedown Condit who was extremely hesitant with his striking.

St. Pierre, known as an excellent wrestler was able to successfully take Condit down on all seven of his attempts.

A series of elbows by St-Pierre from half-guard to Condit’s head caused a cut to his right eye.

In what was the biggest fight in mixed martial arts history for a native New Mexican Condit, came close to ending the match early in the third round with a left hook, over the top right combination- which missed- but followed up with a left high-kick which landed and floored Pierre. The Canadian would later admit that he never saw the kick.

Condit would pursue St-Pierre to the ground where he landed a limited amount of strikes. St-Pierre’s up-kicks helped keep the attack at bay and was eventually able to weather the storm and control the tail-end of the round.

The final two rounds saw Condit fight from his back for most of the contest. He had spurts of effective punches and elbows but was unable to hurt St-Pierre, who overpowered and outclassed the former WEC champion on the ground with barrages of punches and elbows.

When the judges decision was announced it was a forgone conclusion that St-Pierre had been victorious; the scores were presented as 50-45 twice and 49-46.

During the post fight interview St-Pierre mentioned that he know knew what ring-rust was and called Condit the best fighter he has ever faced. When asked about middleweight and pound for pound champion Anderson Silva, St-Pierre failed to fully acknowledge the already proposed super-fight for next spring

A humble Condit would thank the crowd and recognize the superior skill of his French-Canadian adversary.