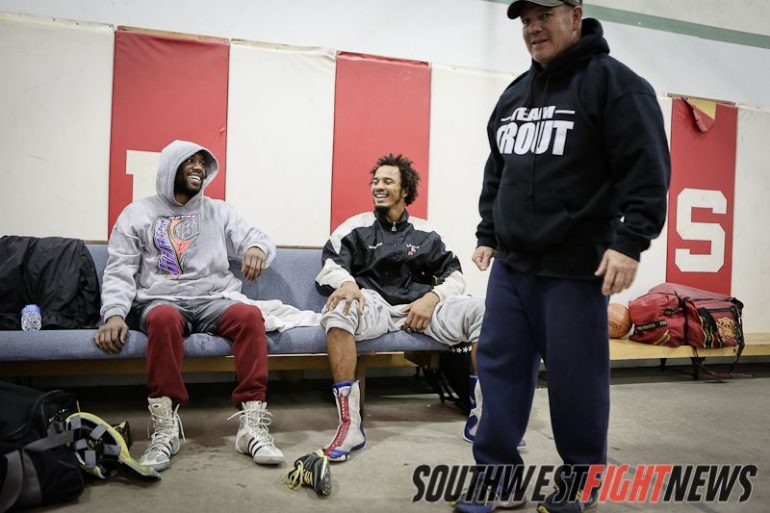 Saturday morning SWFN (Will and Jorge) made the trip from Albuquerque to Ruidoso, New Mexico to visit WBA Super Welterweight champion Austin Trout and Team Trout on their final day of camp for the December 1st showdown against Miguel Cotto.

Sunday the team would head back home to Las Cruces for a couple of more days of training before heading out Tuesday to New York City.

Here’s a recap of our trip:

10am  Depart from a South Valley Chevron. (Sorry no photo. Get over it)

11:30 am We hit a straightaway on NM Highway 380 that showcases the beautiful features of the New Mexican desert.

12:30 pm We reach the Carrizozo Malpais; 5,000 year old basaltic lava flows that stretch about 75 kilometers. The lava flow is among the largest in the world.

01:20 pm We enter Team Trout’s temporary residence to find Austin Trout and longtime friend and training partner Siju Shabazz lounging. Guests had been visiting the team throughout the day. Each bestowing their well wishes to Trout.

Only a couple of pounds off the 154 weight limit he will be facing Miguel Cotto at this Saturday, in their WBA Super Welterweight Championship in Madison Square Garden, the team it seems is treating their last day of training in Ruidoso like the last day of school- that perception would later change.

A bootlegged copy of the film “That’s My Boy” featuring Adam Sandler and Andy Samberg plays in the foreground. (Great quality by the way. The footage we mean, not the actual movie.)

A “2pm or 3pm training session” would obviously be postponed.

2pm Assistant trainer Randy “Moose” Gomez handles a bit of PR work for Trout and shows us a product known as “Limebrero” which an old high school friend created; Trout will be lending his hand in promoting the product. Minutes later head trainer Louie Burke emerges from the restroom, grabbing the bottle of Febreeze seen in the middle of the photo.

Jorge, would eventually get his balls busted for destroying the same room soon after.

“Damn, Louie, Jorge must have had the same shit to eat that you did,” says Gomez.

Burke also chimes in, “Chingado! Spray that down man!”

We would leave the group momentarily to have lunch and coffee in downtown Ruidoso.

3pm Not concerned with the weight cut that Trout is going through, we selfishly indulge in an Angus Beef Bacon Cheddar Burger at Hall of Fame Burgers in downtown Ruidoso and walk to a nearby Starbucks for some drinks.

03:45 pm We walk back to the Westwinds to see the group of four loading up their early 1990’s Chevrolet G-Series van, labeled “Austin ‘No Doubt’ Trout WBA Super Welterweight Champion www.AustinTrout.com” on two opposing windows.

“No coffee for us?” says Gomez. “I thought we were cool man.”

They invite us to join them in their van on the way to First Baptist Church.

04:05 pm We arrive at the church – which serves not only as a place of worship but as a boxing and basketball gym.

Trout can be seen on his phone; for most of the day he has been in contact with his manager Bob Spagnola discussing possible amendments to the contract he has signed with Cotto. One of the proposals is a rematch clause.

Trout reveals to us that Cotto will be making $5 million for the fight against him.

We are challenged by Trout to a game of ‘Best of five’. A few weeks ago, we beat Trout and posted the video online. This time around neither one of us could hit a shot to save our lives. Unlike the last video, this one will never see the light of day.

04:10 pm After the second hand-wrap is put into place the mood in the gym instantly changes; Shabazz begins his workout on the speed bag and heavy bag. Trout begins to loosen up and does not speak during his routine.

04:40 pm Burke and Trout begin their mitt work. They ask us not to video tape the footage as most of their session is the game plan they have set for Cotto.

5:30 pm Trout hits the heavy bag for about 20 minutes taking the standard 30 second breaks between each round. He tops off the routine with two none stop flurry filled rounds and does not appear winded. His conditioning in the high elevation was very impressive.

06:10 pm After their respective workouts Trout and Shabazz joke around with Burke.

06:20 The entire groups rides back to their lodge. Trout spends most of the ride Facebooking and Tweeting. Sunday morning they would head back to their homes in Las Cruces and would do another workout that day and Monday. Tuesday Trout will have a police escort to El Paso International Airport to depart for New York City.

06:40 Trainer Louie Burke joins us for an interview where he recaps the training camp and remembers his one-time opponent the late Hector “Macho” Camacho.
[youtube id= “wmiph0NoiTI” width=”600″ height=”350″]

06:50 We say our good-byes to the Team Trout crew and wish them luck.