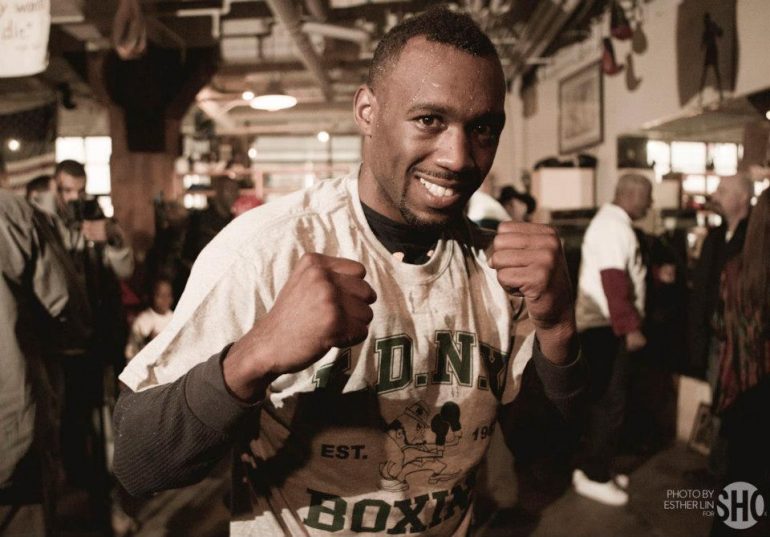 Earlier today at the Trinity Boxing Club in Manhattan, New York, Austin Trout and his team held a workout for members of the media. The session comes a couple of days after Miguel Cotto’s workout, his opponent for Saturday night’s WBA Super Welterweight championship at Madison Square Garden.

A very loose Trout was greeted by the journalists and a few fans, a group of which came all the way from Dublin, Ireland to see him fight. A pair of New York firefighters also presented Trout and his trainer Louie Burke with some t-shirts.

“Team Trout! Team Trout!” he exclaimed. “He gon‘ shock the world and I’d get ready for it y’all; like Ali did in ’65!”. Incorrectly referring to Muhammad Ali’s “I shook up the world!” quote after his upset victory over Sonny Liston which actually took place in 1964.

As Trout was getting into his boxing shoes a vibrant boxer by the name of Jorge Diaz came over to speak to him.

“Man, you got people taken pictures of you taking off your shoes man,” said Jorge Diaz (16-1, 10KOs) to Trout. Diaz is an up coming fighter out of New Jersey who will be on Trout’s undercard.

The number of camera’s and media attention that Trout has received since arriving in New York is something that has lacked throughout his career.

“All he wanted was an opportunity, to show the world,” says Watson of Trout who will be fighting the first elite fighter of his career when he steps into the ring to face Cotto.

“You can quote me he gon’ whoop his ass, ninth or tenth round,” proclaimed Watson.

The relatively short workout consisted of Trout shadow boxing and his trainer Burke swinging a hand-towel to work some head movement. A playful Burke even intentionally swung his towel at reporters and photographers ringside.

The training session ended up serving as a great PR opportunity for Trout as he signed autographs and took pictures with fans and even some overzealous reporters.

Halfway through his workout Trout invited his oldest daughter and some nephews into the ring where they all took turns in chasing each other around the ring.

Trout’s daughter, the oldest of his children, was the only one not intimidated by her father standing her ground and showing off a very impressive lead right jab.

Tomorrow the weigh-ins for the entire Trout and Cotto card will take place. It will be the last time the two fighters will see each other before their bout on Saturday night.