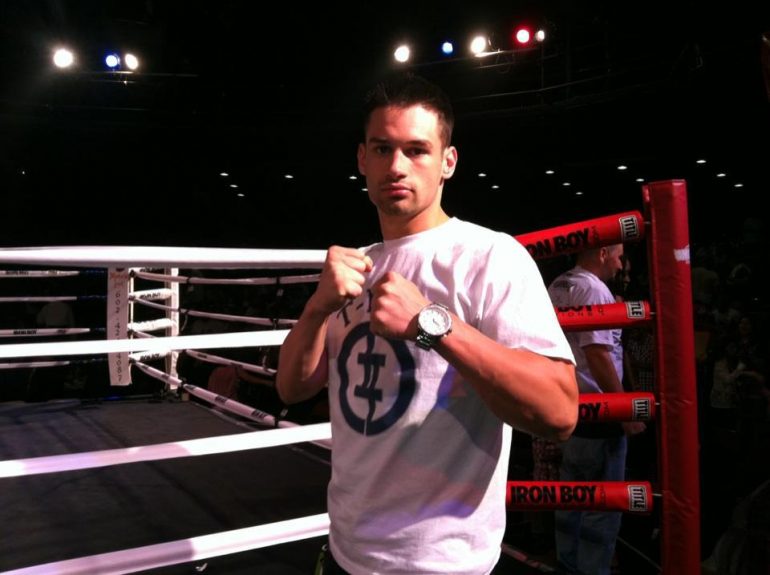 What can you tell by looking into a man’s eyes? Some say you can see his true character. The ancient Egyptians saw the eye as a powerful symbol for protection in the God Horus and at the same time a representation of the solar deity, Ra’s powerful destructive force. You will witness both of those characteristics in Phoenix’s undefeated Light Heavyweight Trevor McCumby’s boxing style.

“Usually the day before when I’m at the weigh-in, when I look into his eyes I like to see if he has the fear in his eyes or not,” he says of when sizing up his opponents. “I fight with a ferocity and obviously every time, (in) every fight I like to get the guy out.”

In six fights, McCumby has literally a perfect record of six wins with six knockouts. Only two of his fights has even gone past the first round.

McCumby found out in his last outing that a brawling style is not always necessarily the best way to obtain the knockout. His opponent Michael Glenn, had a solid chin. Instead of overpowering him, McCumby resorted to a boxer mentality, staying defensive and setting up punches. The impromptu style change  allowed a “natural knockout” by way of a body shot to occur.

It was the first time Glenn had succumbed to another fighter via knockout.

The recently turned 20-year-old McCumby’s recent performances are not taking those who followed his amateur career by surprise. He was a five-time amateur national champion and is one of a small number of American fighters over the past five years that has been allowed to turn professional at the age of 17.

He began training in boxing at the age of 7. His 140 victory to 11 loss amateur career was split between his birth-state of Illinois and his current state of Arizona, where he moved to at the age of 15. For most of his amateur he trained under the tutelage of his father.

At the age of 17, McCumby won the 2010 Under-19 National Championships. At the event scouting young talent, was well known boxing manager Cameron Dunkin.

Following the tournament victory, Dunkin approached the McCumby’s with the idea of signing with him to a managerial contract. Soon after McCumby was granted a professional boxing license in the state of Nevada, although he would not make his debut until he turned 18.

It was around that time McCumby and his father would end their boxing relationship.

He says that he and his father continue to maintain a relationship. Split between two sites, his training is now done with Alan and Wayne Viers at the Busted Knuckle Boxing Gym in Phoenix–who can also be thanked for McCumby’s incredible physique– and the Robert Garcia Boxing Academy in Oxnard, California.

“Training out (in Phoenix) I feel a lot more comfortable,” says McCumby. “I like being around my family; my mom and all my siblings. Going out to Oxnard, I have great sparring and obviously working with Robert is huge, he’s a great trainer.”

On Saturday night, McCumby will face Eliseo Durazo (5-3, 2KOs) on the biggest boxing card of his young career at the Home Depot Center in Carson, California. He will be part of a youthful undercard set for the highly anticipated IBF Super Bantamweight Nonito Donaire-Toshiaki Nishioka champioinship bout and the all out brawl expected between Mike Alavardo-Brandon Rios in the co-main event.

“(The opportunity) it’s huge. Things are slowly turning into my dream; ever since I was 7-years-old,” says an optimistic McCumby of what so far is the biggest boxing card he has been on.

Also joining him on the undercard is friend and fellow Arizonan Jose Benavidez Jr., who many consider the top United States prospect. Both fighters came up through the amateur ranks together and coincidentally went professional at 17 and made their professional debuts in 2010.

Despite is youth, McCumby carries himself with a level of maturation that would have anyone that he was ten years older than he is; or perhaps it’s the full beard he can easily grow and a strong five o’clock shadow that would even draw praise from Drake.

Stream: www.toprank.com  will be carrying the undercards featuring McCumby and Benavidez Saturday afternoon.