The “San-I Warrior” Angelo Sanchez transitions from MMA into boxing 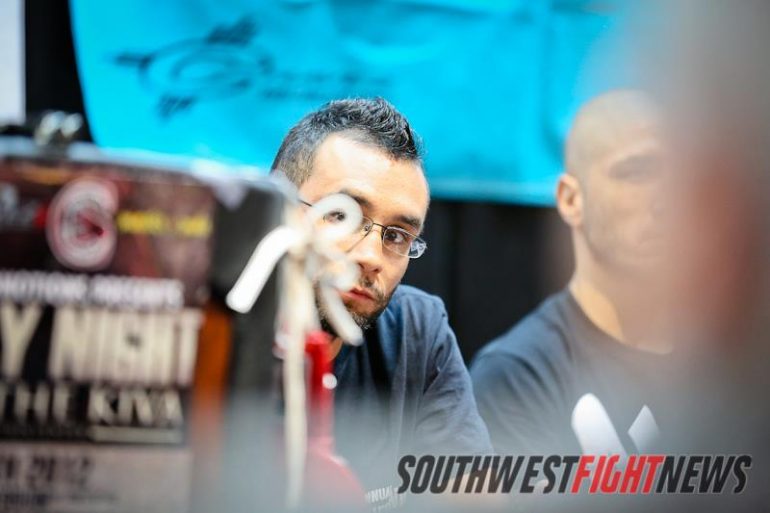 The career of Angelo Sanchez would see plenty of opportunity. Aside from his reign as KOTC Champion, Angelo would go on to fight for Bellator MMA. Photo Credit: WIll Fox / The Fox Identity

On October 27th, Angelo Sanchez of Pojoaque, New Mexico will continue his transition into a new sport. The event “Saturday Night Fights at the Kiva” will be held in the Albuquerque Convention Center and will feature former title holder Fidel “The Atrisco Kid” Maldonado, two top female boxers Amanda Crespin and Brandi Montoya and a fight between former MMA fighter Sanchez and Jose Luis Sanchez, no relation of course.

Angelo “The San-I Warrior” Sanchez will be bringing his talents from the Warrior Training Center in Pojoaque to Albuquerque to compete in his second boxing bout. In fact, it will be his second boxing fight in about a month’s span. Sanchez participated in the “Boxing in the Pavilion” event in Santa Fe in late September. It would be his boxing debut as he would face off with a much more experienced Antonio Martinez.

In an entertaining four round affair, Sanchez would show that he was more then capable of making the transition from one sport to the other. While many argued the fight to be swayed for Sanchez and some making the case for Martinez, the judges decided the fight was a draw. It may not have been the outcome desired by Sanchez, but he showed his effective striking and ability to compete with experienced boxers.

Sanchez had been to that point, a mixed martial artist by profession. He is amongst the most recognizable MMA fighters in our state and is well regarded by fans and competitors alike. Making his pro MMA debut in 2007, Sanchez has accumulated a record of twelve wins and three losses, while currently riding a four fight win streak, the King of the Cage veteran isn’t changing sports for lack of success. In fact, Sanchez may be peaking in his MMA career as the 145-pound featherweight has one of the most successful periods of his career happening during his transition into boxing.

Mixing up training between his own gym in Pojoaque and the Santa Fe Brazilian Jiu Jitsu Academy that notably feature Strikeforce contender Quinn Mulhern, Sanchez is the true definition of a hybrid fighter. The Academy is also home to Coach Thomas Pless who is a notable name in the advancement of Muay Thai in the area. With such resounding martial arts credentials, Sanchez is simply tacking on one more combat discipline with his second boxing bout this Saturday.

In terms of style, Sanchez is a good match up for his opponent Jose Luis Sanchez who did struggle with an MMA fighter in his boxing debut in June. That fight should be encourage to Angelo, as he brings his style of striking into the ring. While Jose Luis may be the more experienced and technical pure boxer, it will be entertaining and interesting to see how Angelo will implement his own skills and to see how much progression he has made since his last impressive outing.

Stay tuned to SWFight.com for results from this Saturday’s event!