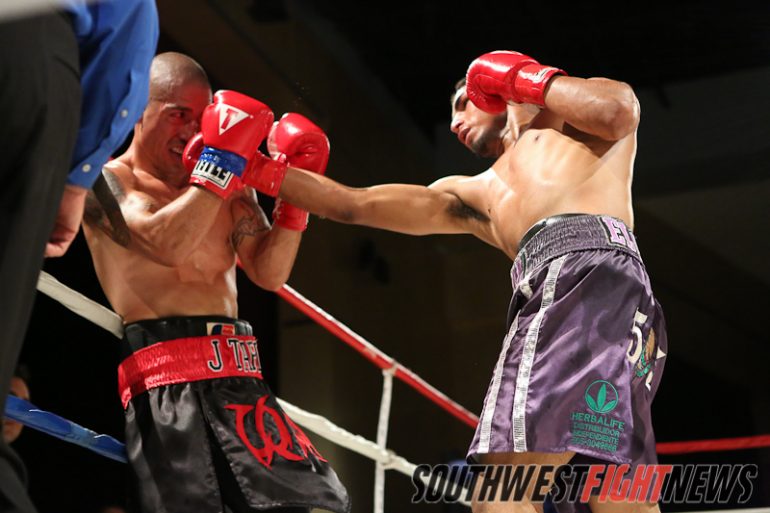 A crowd of about 700 were on hand to watch Chavez and Crespin Promotions’ Saturday Night Fights at the Kiva. The event which had a very entertaining start with the undercards had a main event that failed to deliver a fight.

For the entire night, Maldonado tried to force action while Titsworth used arm length as shield and grabbed Maldonado avoiding any interaction.

Maldonado Struggles to Avoid Titsworth’s Bro-Hugs
In the main event Fidel Maldonado Jr. found himself attempting to pull away from the grasp of Trenton Titsworth. The southpaw vs orthodox, height and arm length differential made for an anti-climatic end to an otherwise action filled card.

Anytime Maldonado would attempt to get passed Titsworth’s reach, the six foot four inch anomaly would hunch over the much shorter Albuquerquean or hug him.

They were boxers in a ring but the Nebraskan provided a clinching performance that would have won him at least a bronze medal at last month’s Grapplefest in Rio Rancho.

Despite Titsworth’s reluctancy to engage, Maldonado did land sporadic lunging punches to snap his opponent’s neck back but it failed to impress the crowd who had been spoiled with two stellar fights earlier in the evening.

Even the ringside doctor stood up during a couple of the rounds to chat with someone in a ringside seat.

The affection displayed by Titsworth is not something that surprises hardcore boxing fans.

In a 2008, an HBO fight nonetheless, he intentionally kissed Jessie Vargas, drawing a punch from him during the referee’s break along with a two point deduction for his unsportmanlike conduct.

The act drew an out character comment from HBO announcer Jim Lampley during the replay: “There it is. Indeed he kissed Vargas behind the ear which prompted Vargas to knock the living sh-t out of him… and a lot of guys will do that when you kiss them.”

Last night’s contest was definitely not a bout Maldonado needed at this point of his career. After displaying a new level of maturation in his last contest against a high quality level opponent, Maldonado’s frustration last night led him to throw verbal jabs and even drop his hands for most of the fight against Titsworth.

In a strange set of scores handed in by the judges, Maldonado was awarded a split decision victory of 80-58 and 80-59 twice.

For those of you scoring at home that would average to 7.2 points per card for Titsworth. (Scores include a one point deduction and two-point deduction handed to Titsworth for holding.)

What would make Titsworth so reluctant to exchange? Maybe he knew he was in the ring with a fighter with incredible KO power.

It should be noted by the public that the 28-year-old is a widow and a single father of four. As long as promoters continue to give him fights he has more reasons than most fighters to do whatever he can to avoid being hit.

El Toro TKOs Garcia
Arturo Crespin’s pressure was more than the 39-year-old Jose Cruz Garcia could handle.Even Garcia would put on small flurries his punches did not have any snap and did no damage to Crespin who would respond with huge power shots to the head and body.

In the sixth round, Crespin led a combination with a shot to the body then changing levels catching Garcia with a huge hook to rock him then following up with two more similar punches.

Hurt and up against the ropes Garcia would only be able to defend himself with a lazy jab exposing him to more punishment. Garcia’s head would end up on the opposite side of the rope where he would eat a few more shots before being saved by the referee.

Fighting from against the ropes for most of the fight, Fuentes would land huge shots that would snap Montoya’s head but not even daze her.

The nearly six pound weight advantage Montoya had at the weigh ins, more along the lines of out 10 on fight night, was evident as she was able to easily bully, and take the smaller Fuentes shots.

Montoya’s evolution as a fighter in such a short time span is quite remarkable. It will be interesting to see if her ring generalship will accompany her as she moves up in weight.

Morrison’s Motor Stopped by Cisneros
The locally popular Victoria”La Reina de Guerra” Cisneros, lived up to her nickname from the start of her contest with DJ Morrison.

Implementing a non-stop attack, Cisneros would ultimately wear Morrison down to the point where her conditioning could not keep up.

As her corner left her side to start the fifth round, Morrison stood in a daze and did not respond to the referee’s question of whether she wanted to continue.

The early rounds were controlled by Cabral’s footwork and technique. It was the middle rounds where Gallegos would event stalk and catch Cabral with devastating hooks seriously hurting Cabral in the third.

To commence the fourth round, Cabral danced around the ring purposely staying away from any action. This was a unpopular tactic to many of those in attendance.

Despite running Cabral whose left eye had begun to swell, managed to cut Gallegos above his left eye. Using it as a target Cabral would attempt to avoid slugging with the stronger opponent.

The last two rounds saw Gallegos stagger Cabral with a huge right cross allowing him to attack for most of fifth. In the final stanza Cabral would use lateral movement to outbox Gallegos who seemed to be wearing down in final three minutes.

Judges ruled a majority decision scoring the bout 58-57 Gallegos and 57-57 twice. Press row all scored the fight for Cabral; SWFight.com, NewMexicoBoxing.com, Austin Killeen had it 58-56 while The Albuquerque Journal scored it 59-55.

Sanchez vs. Sanchez – Battle of Chins and Skill
In the initial bout of the evening Jose Luis “Güero” Sanchez defeated former King of the Cage Bantamweight champion Angelo “San-I-Warrior” Sanchez in a fight full of exchanges.

It was the second career fight for both fighters but the way both carried themselves in the ring was impressive.

The “San-I-Warrior” displayed an impeccable chin. In 14 mixed martial arts fights he had never succumbed to fighter via knockout and did not on this night. He continues to draw high praise for his transition into boxing.