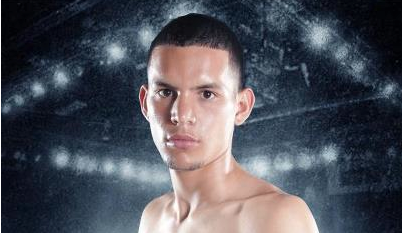 Phoenix, Ariz.–At only 18 years old Carlos Castro (1-0), has a reputation as one of the top young boxers in the state of Arizona. As an amateur Castro, composed a record of over 110 wins to only 15 losses. He is a former three-time National Silver Gloves champion but that list of accolades should not be the reason why you should be most impressed with this extremely mature young man.

Castro, was only a year old when his father moved their family to southern Arizona from the mexican city of Ciudad

Obregón, Sonora, in pursuit of the proverbial “better life”.

“I don’t even remember life in Mexico,” says Castro. “I was so young. After we left, we rarely ever went back to visit.”

Upon their arrival to the United States, the family ended up immediately seeing Castro’s older brothers involved with gangs. To stray his youngest son away from the vices, Castro’s father introduced him to the sport of boxing at the young age of six.

The art of boxing would eventually lead Castro to capturing the National Silver Gloves, the premier nationwide amateur tournament for boxers between the ages of 10 to 15 years old. He would win the tournament three times in a span of four years an extremely impressive feat.

Despite his success, Castro would take a short break from the sport in his mid-teenage years. When he felt himself straying away from the path his father tried laying for him, he returned to it and began to fully apply himself to the craft.

Shortly after his restored dedication to boxing, real-life hit.

During his sophomore year in high school Castro’s girlfriend Kareli, would give birth to their son, Jerry.

To support the family Castro, dropped out of high school and began working at a scrapyard full-time. The couple refused assistance from their families, preferring to handle the situation on their own.

The situation triggered an extra sense of determination in Castro, in not just life but in his dedication to boxing. He continues to both work at the scrapyard and train, hoping that the sport will serve as means of providing the couple and their son the better life his father came to this country for 17 years ago.

“He’s the reason I’m doing all of this for,” says Castro, of his child.  “He motivates me. I don’t want him suffering like I did. I want him to grow up in a good neighborhood, with good people; go to good schools and make it to college.” 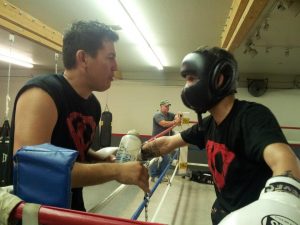 Assisting in preparing Castro, in his venture to make boxing a career are his trainer Andrews Soto and his strength and conditioning coach Moses Salazar. Both men train fighters at the Knockout Boxing Club near Phoenix’s Nuestro Barrio district, just east of downtown.

“The kid is unbelievable,” says Andrews Soto. “He’s as naturally gifted as a boxer that I have ever seen. There’s only so much that I teach him. The rest is just natural.”

The two first met 10 years ago and have a strong relationship.

“I’ve been with him for a very long time,” says Castro. “He’s always been there to support me in whatever I need. He’s like a father to me.”

The gym is located in an industrial part of city, just feet south of an assemble of 30 Southern Pacific Railroad tracks and just two miles west of Phoenix’s bustling Sky Harbor international Airport.

The gym, almost strategically, is placed in a tough neighborhood; literally on the “other side of the tracks.”

A refurbished warehouse, extremely humid upon entry, houses the ring to the right hand side and Herbalife stand, which is operational during business hours, to the left.

Punching bags and equipment are neatly hanging in the background and are set in two adjacent lines.

It is a spacious gym. A prefect breeding ground for fighters.

It served as a training ground over the hot Arizona summer for Castro’s professional debut in June, where he defeated Tony Green by a convincing unanimous decision shutout victory.

The same venue will host his second career fight this Saturday as Iron Boy Promotions‘ presents Boxing Continues a fight card with 9 scheduled fights. There, Castro will be taking on fellow Phoenician Angel Gonzalez (0-2).

The promotion is quickly becoming one of the most popular attractions in Arizona boxing. It was so impressed by Castro, that it signed him to a three-year contract.

Iron Boy is expected to put on nine shows in 2013 which means that if he continues to be successful, we can expect to see Castro, headline one of the cards sometime in the near future.

The bout against Gonzalez is scheduled to take place at 122 lbs.

For more information on the card set to take place at 6pm in Phoenix’s Celebrity Theater this weekend please visit
http://www.iron-boy.com/events.php