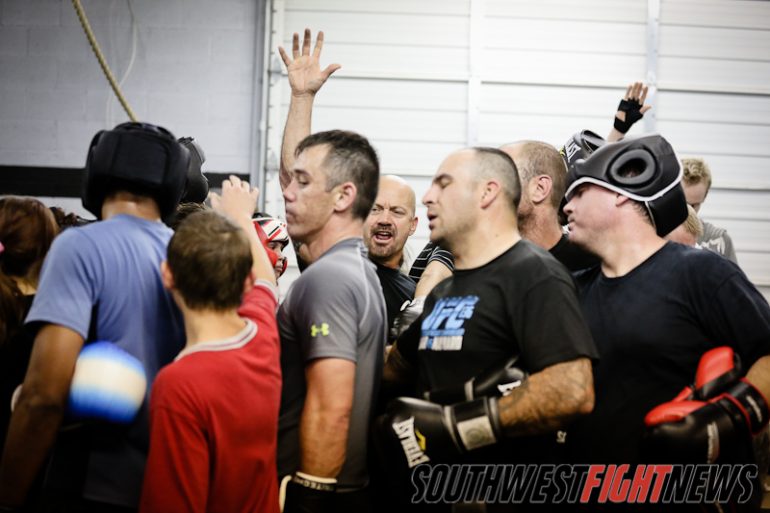 In the combat sports world, there are certain intangibles that help competitors and coaches alike really stand out from the masses. Amongst those intangibles are toughness, desire and determination. Those are characteristics that just cannot be taught inside a gym, a class room or anywhere else. These types of attributes are often brought into perspective by one other trait that you can only accumulate through time.

Judgement MMA & Fitness is one of the newest combat sport oriented gyms in the area. The gym is located on Northern Boulevard in Rio Rancho, New Mexico and sports a five thousand square foot facility that not only houses the gym but also a gear store filled with everything from shin guards to mouth pieces. The gym is run by husband and wife, Scott and Robin Marlowe.

Scott is a Navy veteran and the military background shows full circle in his demeanor as well as his disciplined and diligent methods of coaching his students. Marlowe brings with him the experience that only comes with true dedication and passion, with twenty five plus years of striking experience including time spent under the tutelage of famed coach Mike Winklejohn. The students of Judgement MMA are gifted with an incredible amount of knowledge from the AKKA Black Belt.

The fitness aspect of the gym is covered with a wealth of knowledge as well under the watchful eye of Robin. Bringing a very goal oriented, intense passion in her personal and group training style, the participants who leave their fitness in her hands are assured to not only be healthy but be pushed to their limits in order to achieve goals. Bringing more then twenty years of her own fitness experience, the gym is covered thoroughly when it comes to that coveted asset of fitness and combat training.

As head Coach, Scott is joined by grappling coaches Randy La-Su Rodger and Rich Chavez. Rodger, a second degree Brazilian Jiu Jitsu Black Belt under Carlos Machado is a talented teacher who brings with him the direct Gracie lineage into his curriculum. Chavez, a New Mexico native is notably amongst the inaugural group of competitors that represents Team USA in Olympic grappling.

Amongst the talented athletes who are part of the Judgement team is Adrian Cruz, the undefeated professional mixed martial artist who is making waves in the area. Improving his record this past August to 2-0 as a professional and announcing his return to the cage on November 10th, Cruz is attempting to cement his mark on the regional scene with a successful end to 2012. The King of the Cage bound fighter is a heavy handed, explosive wrestler who is tough as nails and pushes a very frenetic pace.

The gym also boasts an impressive roster of female fighters that stay heavily active in the smoker and amateur scenes. Amanda Lovato will be making her amateur MMA debut at the November 10th King of the Cage event on the same card as teammate Cruz. Sharing the characteristics of him, Lovato is a very tough fighter who is very aggressive in her striking game. This is a step in a different direction for Lovato as she has been a regular on the smoker scene for boxing and kickboxing.

While short in stature, Brianna Padilla packs the punch in her striking game. She is yet another of Coach Marlowe’s dedicated students who is as tough as they come and stays active in competition. Padilla can push the pace on offense or play the role of counter puncher and her talents will be put on display on a December 1st event in Las Cruces, New Mexico. The event will be host to several of the Judgement competition team.

There are so many more hard working competitors in the gym and through the hours of training we will be sure to hear all about them as we continue to follow the regional combat sports scene here in New Mexico.

SWFight.com wishes the best for all the Judgement fighters in their upcoming bouts and in their continued training efforts.

Scott is incredibly talented striking coach. Robin will get you in the best shape of your life! As a BJJ Black Belt and practitioner for over 17 years I highly recommend this gym to everyone who wants to explore the world of MMA, striking, ground fighting or personal fitness. If you want to be part of a family who cares about your goals, than come to Judgement MMA & Fitness. You will not regret your decision