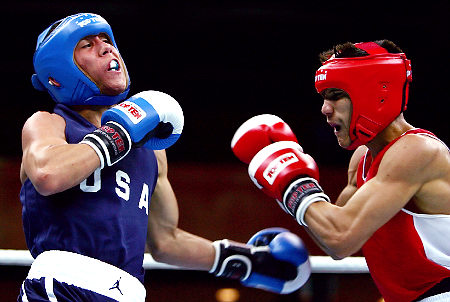 The following notice that was provided Friday but not distributed to the masses until today by the Executive Director of USA Boxing Anthony Bartkowski to USA Boxing Board of Directors, LBC Presidents, LBC Vice Presidents, LBC Registration Chairpersons, LBC Treasurers (LBC refers to Local Boxing Committee, referring to representatives of USA Boxing in their respective locales) explaining the International Boxing Association’s (AIBA) decision to suspend all United States amateur boxing activities until January 19th, 2013.

The decision is mostly based on statements made by the former President of USA Boxing Hal Adonis, who still serves as a board member, regarding homosexuality’s prevalence in an article written by Ariel Levy for The New Yorker Magazine.

Shortly after the statements were published the AIBA ordered USA Boxing to remove Adonis from the board for his insensitive remarks, a decision USA Boxing did not execute but left up to it’s Board of Directors to vote on; an option that was not given by the AIBA.

This ultimately led to today’s punishment.

The AIBA statement made the following orders:
1. USA Boxing shall be fully suspended for a period of 3 months from October 19, 2012
2. Mr. Adonis shall pay a fine of CHF 2,000 [roughly $2,145] and be suspended from all boxing activities at national
and international levels, for 2 years starting from October 19, 2012.
3. The costs of the proceedings, fixed at CHF 1,500 [roughly $1,610], shall be borne equally between USA Boxing
and Mr. Adonis.
4. The decision will be communicated to USA Boxing, Mr. Adonis (via Hollie L Wieland of Karp
Neu Hanlon Attorneys) and to the Headquarters of AIBA.

This decision should not have blindsided USA Boxing Members as they were made aware by Mr. Bartkowski in September of possible fines and complete termination could be handed down by the USOC (United States Olympic Committee and AIBA.

Locally, this has a huge impact but most notably the decision will not cancel the New Mexico Silver Gloves Tournament that is to take place December 7th-9th in Las Vegas, New Mexico.

In April, Silver Gloves ended it’s relationship with USA Boxing. As a result USA Boxing pulled it’s insurance and it’s sanctioning of those events. It also made a stern warning in it’s April 2012 newsletter letting it’s participants know that any member of USA Boxing who participates in an unsanctioned event will be subject to suspension.

It is not clear if USA Boxing participants will still face that punishment if they partake in Silver Gloves during USA Boxing’s AIBA mandated 3-month suspension.

The last USA Boxing sanctioned event to take place this year in New Mexico will have been this past weekends “Brawl in the Fall” card in Los Lunas.

Here is today’s the letter from Mr. Bartkowski:
(http://www.teamusa.org/USA-Boxing/Features/2012/October/24/Communication-to-LBC-Leaders.aspx )

USA Boxing and our insurance companies will not take any insurance claims until the AIBA suspension is remedied and/or served until January 19, 2013.

The AIBA Disciplinary Commission levied this suspension against the organization for inappropriate and improper statements made by Mr. Hal Adonis earlier this year.
The AIBA Disciplinary Commission Decision of October 19, 2012 states:
“By failing to remove Mr. Adonis from the USA Boxing Board of Directors when it had the chance to do so, USA Boxing, in essence, endorsed Mr. Adonis’ statements and sent out a message that such behavior was acceptable. The action (or lack thereof) and the very serious and harmful nature of Mr. Adonis statements, has jeopardized boxing and the Panel finds it appropriate to impose a suspension upon USA Boxing. This suspension must reflect the severity of the offence.”

The AIBA suspension terms are:
1. USA Boxing shall be fully suspended for a period of 3 months from October 19, 2012
2. Mr. Adonis shall pay a fine of CHF 2,000 and be suspended from all boxing activities at national
and international levels, for 2 years starting from October 19, 2012.
3. The costs of the proceedings, fixed at CHF 1,500, shall be borne equally between USA Boxing
and Mr. Adonis.
4. The decision will be communicated to USA Boxing, Mr. Adonis (via Hollie L Wieland of Karp
Neu Hanlon Attorneys) and to the Headquarters of AIBA.

This is the initial notification. It is unclear if further conditions or demands will follow. We are waiting on further details from AIBA. Your President; Board of Directors; and Executive Director are working diligently to determine any further demands of this suspension and to see if USA Boxing can offer any remedies to shorten it. In the event that we are successful in shortening or lessening our penalties, USA Boxing will notify you immediately to let you know your sanctioned event can take place. Please assist in communicating this information to your constituents as soon as possible. We will continue to update you on the status of this suspension as necessary. In the meantime, USA Boxing and the Board of Directors are taking every measure available to ensure that amateur boxing is resumed as soon as possible.

Brandi Montoya Ready for her Title Shot and her Candy Corn

The “San-I Warrior” Angelo Sanchez transitions from MMA into boxing

Having the silver gloves in las Vegas is a bad idea… It equals low turnout and revenue made from the fans… Should hold the event in ABQ where we can better turn it in to a family event.