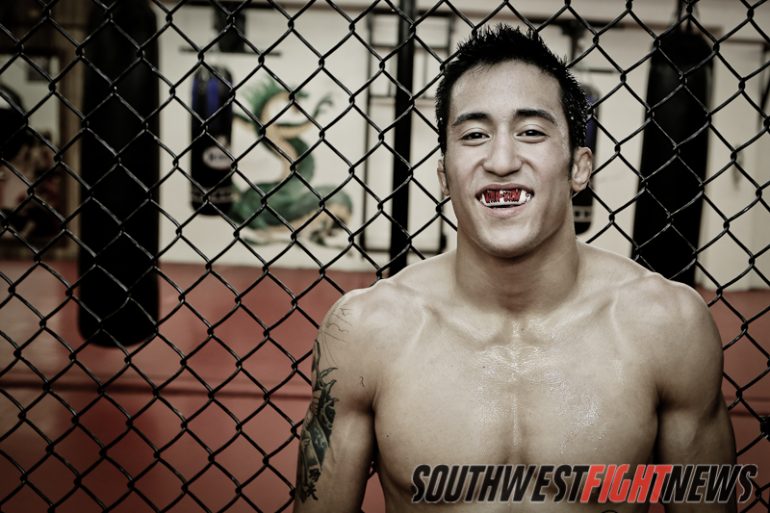 Three months ago Albuquerque’s Mixed Martial Arts bantamweight Joby Sanchez (3-0) was awarded a 5-fight contract by the Xtreme Fighting Championships, after outlasting over 100 competitors in a Springfield, Massachusetts promotional open tryout. This Friday night at XFC 20: High Octane, Sanchez will be making his promotional debut when he faces Chris Dunn (1-1) of Cincinnati, Ohio.

“I’m very proud to represent New Mexico,” says Sanchez. “Especially to fight in the XFC because (it’s) real big on the East coast.”

He also says that there is not too much pressure in representing the state but there are  nerves that come from being the 2012 XFC Open Tryout winner.

Sanchez will also have the weight of putting his locally known gym on a national scale as his fight will be aired live on AXS TV.

At the age of 7 years-old Sanchez started his training at the Chavez Dojo, a gym located in southern-Albuquerque. The gym has been led for 38 years by 9th degree Kajukenbo black belt Grandmaster Melcor Chavez, father of Invicta FC veteran Angelica Chavez.

“The XFC is giving Joby something that I can’t; exposure,” says Grandmaster Chavez. “He could be the best fighter in the world here at the gym but I can’t give him the exposure that comes with the promotion. We’re thankful for the opportunity.”

The dojo is located in a part of Albuquerque known as the South Valley. An area  recognized for it’s vibrant culture provided by a large Mexican population mixed and centuries old Spanish heritage but unfortunately it also has a bad reputation for gang activity. The South Valley is actually not within Albuquerque city limits therefore does not receive the standard commodities a city proper area does.

Although it is quickly improving, the South Valley sees a weak infrastructure with a lack of sidewalks and parks, making it easy for youths to get off on the wrong path. It is the same part of town where Jackson’s-Winkeljohn’s MMA world renown trainer Greg Jackson attended high school.

Over the past five years an explosion of boxing, jiu-jitsu and mma gyms have opened throughout Albuquerque, and the South Valley was not left out of the movement. The Chavez Dojo has always been a haven and along with the aforementioned gyms, it has helped provide an alternative lifestyle for the city’s youth.

Sanchez attended Valley High School. A school known locally for having a consistently competitive sports program. There he would try wrestling for the first time in his life his sophomore year.

When you consider what he went through his first year, going 0-16 on the junior varsity team, it’s a surprise that Sanchez would eventually make a splash in the New Mexico MMA scene.

“Man, I sucked,” he recalls. “There was a girl on the team that was ranked higher than me!”

The determined Sanchez, would see a drastic change in his performance by his senior year, finishing runner-up to Rio Rancho High School’s Matt Nuñez at the 2008-2009 New Mexico State Wrestling Championships in the 119-pound division.

The following year Sanchez would represent the Chavez Dojo in his amateur MMA debut eventually capturing a small promotional bantamweight title with Que Loco Cagefighting. He would also carry the gyms banner in his 2011 professional debut.

At the XFC Open Tryout in June, Sanchez won the promotion over by showcasing his well roundedness, an attribute he credits to his knack for new styles.

To improve his ground-game Sanchez recently sought out tutelage from 2009 Pan American Brazilian Jiu-Jitsu Gold Medalist, Rafael “Barata” Freitas, who had moved to Albuquerque a few years before to become an instructor at one of the Gracie Barra academies.

“That’s a privilege in itself” says Sanchez of training with Freitas. “He’s really creative with his MMA jiu-jitsu and he’s always wanting to teach. That right there is a blessing of how he likes to see you improve and likes to see you get better.” 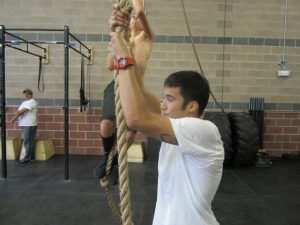 Joby Sanchez has been participating in CrossFit for nearly a year. Photo Courtesy: Duke City CrossFit

Enhancing his strength and conditioning was also an area where Sanchez felt he would have to focus on. He incorporated the CrossFit fitness program into his training regiment last October.

His uncle Eric Wasson, is one of the owners of Duke City CrossFit and introduced Sanchez to the program. He trains with the team two to three times a week.

He will need all his skill sets when he takes on 24-year-old Dunn this weekend. In the Ohio native he will see an unorthodox stand up style as Dunn likes to transition between a low boxing and Muay Thai stances.

Despite having only two fights on his professional résumé Dunn is a veteran of over 15 amateur fights and was able to obtain all in victories in those ranks via KO or submission.

Sanchez will also have a four inch height disadvantage and it will be likely that this fight is won on the ground.