Today at the Montreal Science Center the Ultimate Fighting Championship held a press conference to formally announce their UFC 154 event. The fight card is scheduled to take place November 17th at the Bell Centre in Montreal, Quebec, Canada and will be headlined by reigning Welterweight champion George St-Pierre and interim welterweight champion Carlos Condit.

St-Pierre will be coming off a 19-month layoff; most of the inactivity due to an ACL injury. He took the injury as a blessing stating that over the past year the time off allowed him to rekindle the fire and passion he has for the fight game.

“I’m very glad to be back,” said St-Pierre. “I’ve never been so pumped up to step in the octagon.”

Come November 17th he will also have the crowd to pump him up as he will be fighting in his hometown.

While St-Pierre has the pleasure of driving mere minutes to the fight, Condit will have to make a more than a 2,100 mile journey from his hometown of Albuquerque, New Mexico with the interim title, which he defeated Nick Diaz for in February at UFC 143. 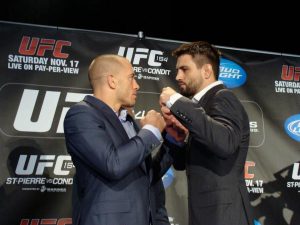 “I think that I have a skill-set that matches up well with Georges,” said  Condit.  “In the past I’ve been able to present opponents with problems they don’t see in other guys.”

The biggest topic that came up at today’s weigh-in was the lack of Greg Jackson in either man’s corner.

Chris Luttrell will be Condit’s primary trainer and St-Pierre will workout with his Montreal-based team Tristar Gym as true to his word Greg Jackson, the head trainer for both Condit and St-Pierre, will not train either one against the other.

The media also questioned the buy-rate the UFC believed this pay-per-view would receive due to the lack of talking either fighting about the other. To which St-Pierre responded, “The guys that are the most dangerous are the gentlemen,”  said St-Pierre.