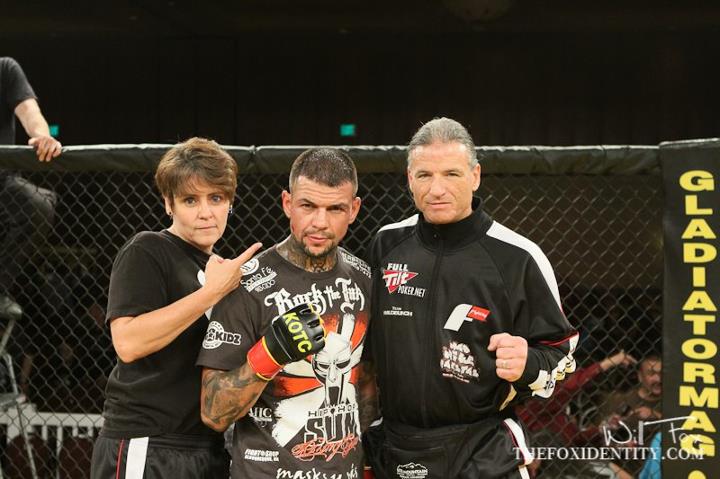 Later this evening, a whole slew of New Mexico fighters will step inside the River Spirit Event Center in Tulsa, Oklahoma for the King of the Cage’s “Heavy Duty”. It will be a busy evening for our locals as FIT NHB fighters Gerald Lovato, Tim Sosa and Charlie Williams will all have very significant match ups on the events agenda.

The event will be headlined by former UFC fighter and The Ultimate Fighter contestant Josh Bryant (13-1).

Seven year veteran of the sport, Gerald Lovato (15-10 pro) will look to add another victory to his illustrious and extensive career when he faces off with another seven year vet Justin Robbins (12-12 pro). Fans of New Mexico’s MMA scene may remember him from a fight in 2007 with Albuquerque fan favorite Mikey Lovato in their Duke City Fall Brawl event.

The fight should be fireworks as Lovato is well known for his ability to brawl and put on an entertaining show. Out of a combined 49 fights between the two competitors they have seen their fights end early almost 70% of the time. Lovato should enjoy an advantage in most areas of this fight especially in the stand up game which is where this fight most likely takes place.

With one of the more interesting nicknames around the sport of MMA, Tim “Timbo Slice” Sosa (10-3 amateur) will fight for the first ever King of the Cage 125-pound amateur title against a hometown fighter, Tulsa’s Todd Hess (5-4 amateur) in what should be yet another exciting bout.

Sosa will enjoy a slight experience advantage but opponent Hess, has seen his fair share of fight time. Hess will be the most experienced amateur that Sosa has seen across the cage in quite some time and it should be a stiff test for the FIT NHB fighter in capturing the amateur title. Hess has several submission victories to his name, so the match up may be favorable for Sosa to keep the fight standing and showcase that striking acumen his fellow teammates are all known for using.

Charlie Williams (3-1 amateur) will be the first Albuquerque fighter to see action tonight and will look to set the tone for his FIT NHB teammates also on the card. Williams will be paired with Dustin Freeman (5-2 amateur) of Arizona in a 145-pound bout. Williams has solid striking and power in his hands, although he gives up some experience in the match up he will undoubtedly be prepared as he had training camp right alongside main card fighter Gerald Lovato and amateur title hopeful Tim Sosa.

Another notable participating in the event, former New Mexico stand out wrestler Cody “The Freight Train” East (2-1 professional) who will battle former arena football player Kinny Spotwood (2-0 professional). Anytime you put two powerful heavyweights in the cage, anything can happen and both fighters may be looking to end the fight early and build off each others young, respectable names.

SWFight.com wishes the best for the local fighters showcasing their talent in Tulsa, Oklahoma tonight and be sure to stay tuned for the results of their match ups!
[youtube id=”rXcekOWGWMw” width=”600″ height=”350″]