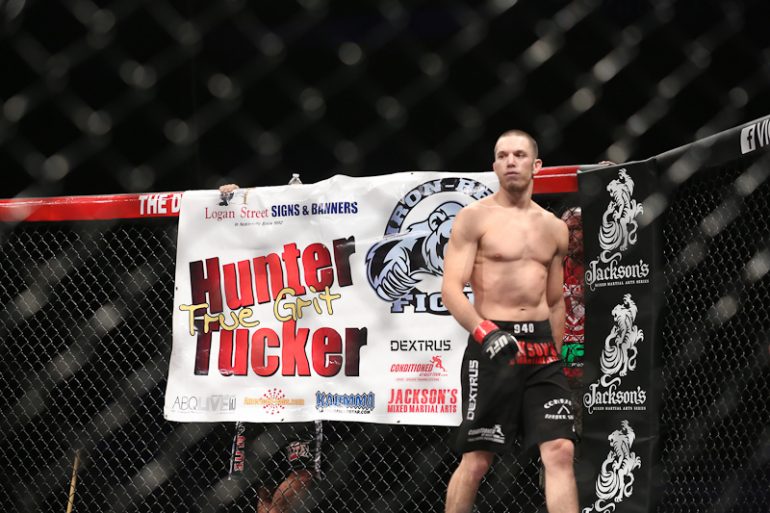 With the Jackson’s MMA Series IX all wrapped up from this past weekend, as the dust continues to settle we can now start remembering the great evening of fights from Tingley Coliseum. From beginning to end the night brought quick fights, exciting finishes, surprise endings and a whole lot in between.

With many fighters winning impressively and really stamping their names down as fighters to remember for fans who will return again to be spectators for regional New Mexico MMA there was one impressive prospect that turned in a very diligent, methodical performance.

Due to that performance, the SWFight.com Submission of the Night will go to Jackson-Winklejohn’s Hunter Tucker (4-0) for his rear naked choke victory over “Nasty” Nate Patterson in the Co-Main Event of the event.

The fight would see the stand up game prevail in Tucker’s favor in the first round as Patterson never seemed to ever find his rhythm and could never get in clean on the very patient Tucker. Using good spacing and footwork, Tucker would clearly frustrate Patterson and that frustration would pay dividends in the second round.

In the second round, Tucker would use his superior striking advantage to get inside and from there get the takedown. He would show he owned the ground advantage as well landing solid blows to the grounded Patterson and would show impressive positional grappling as he would transition from being inside the guard to eventually getting full mount.

Earning full mount would end up dooming the game Patterson as he couldn’t shake off Tucker from advantageous positions. While Tucker threatened with a rear naked choke from the back of a turtled Patterson, he wasn’t able to flatten Patterson out and his choking arm was peeled off.

The unrelenting Tucker would not be denied however, as he dragged Patterson to his side where Tucker once again would once again hunt for the choke. He would get it this time and even with the rear naked choke sunk in, Patterson was not ready to give in to the submission. Unfortunately, Tucker didn’t give it up and Patterson went to sleep forcing the referee to step in at 3:32 of the second round.