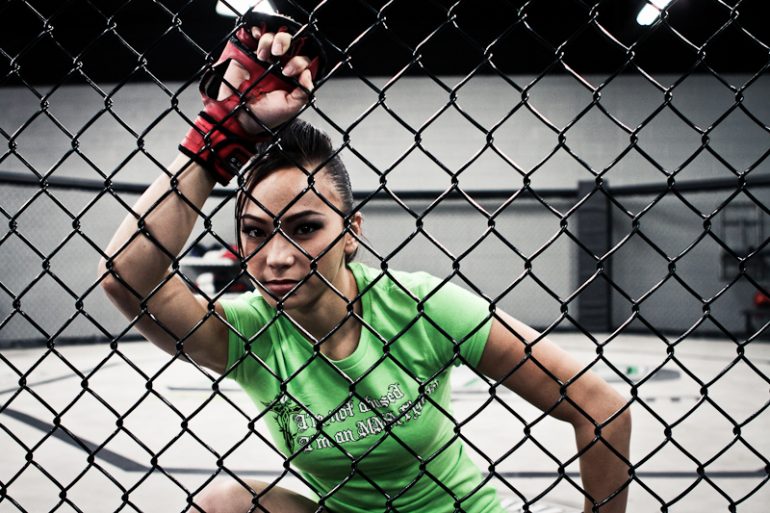 This Saturday night, one of the sport’s most notable female fighters will take her talents to the cage representing Albuquerque’s Jackson-Winklejohn gym in the Invicta 3 event. The Invicta promotion is an all female based organization that has in their first two installments offered out the best of Woman’s MMA to their audience.

Michelle “The Karate Hottie” Waterson is a 26 year old veteran of mixed martial arts. She has a professional record of nine wins and three losses, she hasn’t lost since 2009 as she started 2010 with a spectacular, fifteen second flying arm-bar submission. Since then she has finished both fights and has looked impressive doing so.

While plenty has been going on for Waterson outside of the sport which includes her being married and having her first child, she has emerged as one of Woman’s MMA’s fighters to watch out for. After she gave birth to his daughter in March of 2011 she refocused on MMA and defeated a very tough Diana Rael in January of this year. This will be her second fight after a 20-month hiatus from the sport.

She will be fighting in the atom-weight division (105 pounds) against Lacey Schuckman. Waterson is a practioner of Karate, WuShu and Muay Thai, she has been a veteran of MMA since early-2007. She has competed under prominent organizations like Strikeforce and the Jackson’s MMA Series and has fought notable fighters like WIBA/IFBA Flyweight Boxing Champion Elena Reid, Diana Rael and Mosako Yoshida.

Check out her video promoting the Invicta 3 event that features some great acting from teammates Jon Jones, Travis Browne, John Dodson and Kyle Noke. Below is also  SWFight.com’s interview with Waterson. Join us in sending our best wishes to “The Karate Hottie” in her upcoming bout.