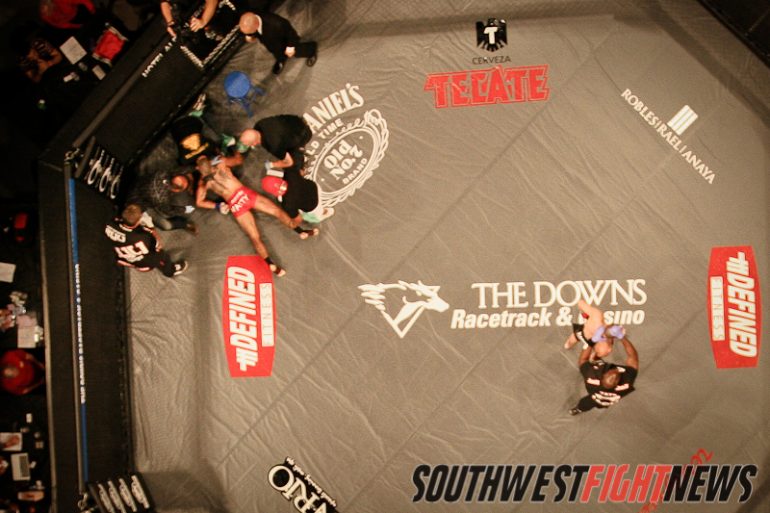 In the main event of the evening Gomez took late-replacement Cerda.

The Texan appeared to be extremely comfortable standing, bouncing around like a boxer. Gomez‘ first takedown attempt pushed Cerda all the back to the cage and to eventually forced him to the ground.

From half-guard Gomez would implement some ground and pound. The smaller Cerda, however would land a short sneaky elbow that would cause a problematic cut over Gomez‘ left eye.

The bleeding from the cut would slow Gomez down to the point where the referee would ask the two men to stand due to inactivity.

While Cerda would stand Gomez would remain kneeling, pawing at his eye and grimacing in discomfort.

“You better suck it up and fight!” exclaimed Gomez‘ coach Greg Jackson. Gomez, however, would remain kneeling forcing referee Richard Espinoza to call in the ringside physician who would stop the fight.

The initial stanza was a paced one. From the onset both fighters were very hesitant with their deliveries.

A clinch between the men ended the stalking. Tucker, was then able to take the fight off the feet momentarily.

Engaging in another clinch Tucker, landed a knee. Patterson would later respond with a right hand.

The men would later exchange leg kicks. Tucker, would follow with a good right hook. From against the cage, Patterson would later land a huge right
knee that would mark the left side of Tucker’s head.

Becoming more of an aggressor, the southpaw Tucker started the second round with a lead right jab. Later he would land a superman-punch and follow it up with a takedown.

From standing position, hunched over his opponent, Tucker would land two hammerfists and then kneel down to his opponent incorporating short elbows and punches into his attack.

Patterson, was able to fend off some of the punches with some of his own. The unfavorable position for him got worse when Tucker would pull off a full mount. Attempting to roll out of danger, Patterson would end up kneeling over face first into the canvass.

Unable to flatten his opponent out Tucker, would pull him into a rear-naked choke where the gutsy Patterson would not tap but would eventually be put out cold.

In his professional debut Gonzalez took on a game Perez. The Jackson’s fighter’s game plan was clear, try to take the fight to the ground.

During one of the skirmishes Perez. landed a knee. It followed a Gonzalez, takedown where Perez, tried to take advantage of the situation, attempting a kimura.

Recognizing this, Gonzalez, took the scramble back up to the feet then to the ground where he attempted his own kimura, eventually rolling it into an armbar that Perez, was forced to tap to.

The first two rounds were easily controlled by Kagan. In the first, she was able to land several knees leading to a takedown that saw her rain elbows to Lovato’s forehead and temple.

Round two began with both women exchanging punches. Kagan, was able to bully Lovato, against the cage and pull a double leg takedown that she used to take the round on the ground.

In the final round, a fresher Lovato countered two of Kagan’s wide combination. Unlike the previous two rounds Kagan did not attempt to take the fight to the ground. Lovato used this to her advantage, out boxing her opponent and even staggering her in the final ten seconds.

Knowles stepped out attempting to touch gloves but Gutierrez did not want to deal with pleasantries.

He quickly over powered Knowles with a barrage of punches ultimately clinching him and applying knees that lifted him off the canvass, into verbal submission.

In the 1st round Tenneson, landed a solid right kick to the body that put Chavez down, allowing the Jackson’s MMA figher to control the round on the ground.

He would finish the contest in the second by initiating a standing guillotine, that would take the match to the ground where he would be victorious through effective striking.