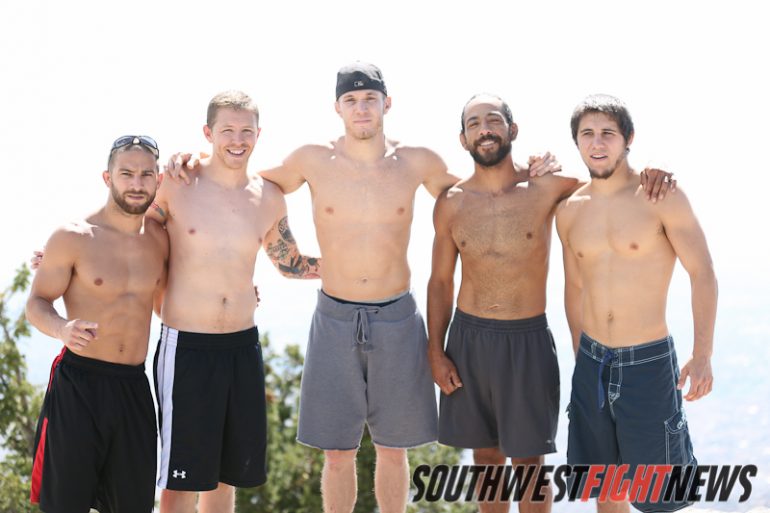 The Southwest Fight News staff had the pleasure of joining a small contingent of Jackson’s MMA fighters and stand up coach Brandon Gibson on a trip to Albuquerque’s Sandia Mountains. Many of fighters have fights upcoming at this weekend’s Jackson’s MMA Series IX, and UFC and Strikeforce events respectively later this month.

For many of the fighters it was their first trip to the top of the 10,700 foot peak.

On this Sunday a group of 12 joined the coach but only a handful would accompany him on the true journey he wished his fighters would indulge in.

The group divided in half; veterans in one of them included UFC fighters Kyle Noke and Cub Swanson, and Strikeforce lightweight Isaac Vallie-Flagg who would partake on a jog.

The other half which included the younger gym fighters, Hunter Tucker, Nick Urso, his brother Anthony who joined their instructor to the Kiwanis Cabin, a rock structure built on the mountain’s ridge, where they met a meditating Nick Gonzalez.

“I can’t believe how tranquil it is up here,” said Tucker who will be participating in this weekend’s Jackson’s MMA Series.

On this leisurely afternoon Tucker performed mitt work with coach Gibson and later lolled with his teammates overlooking the city under the Albuquerque sun, in silence.

The trip is a ritual started by coach Gibson. Only a few have accompanied him to the peak before.

Nature for whatever reason has the ability to make us more attentive and receptive of sounds but none of us were prepared for the enlightening and graceful interview gym veteran Gonzalez was about to give us on how Greg Jackson saved his life.

In what was supposed to be a conversation discussing his professional debut this weekend on the Jackson’s MMA Series card epiphanically turned into an elegant oration that all, not just fighters but anyone in the presence of his voice, would take as word wisdom to apply to any craft and life.