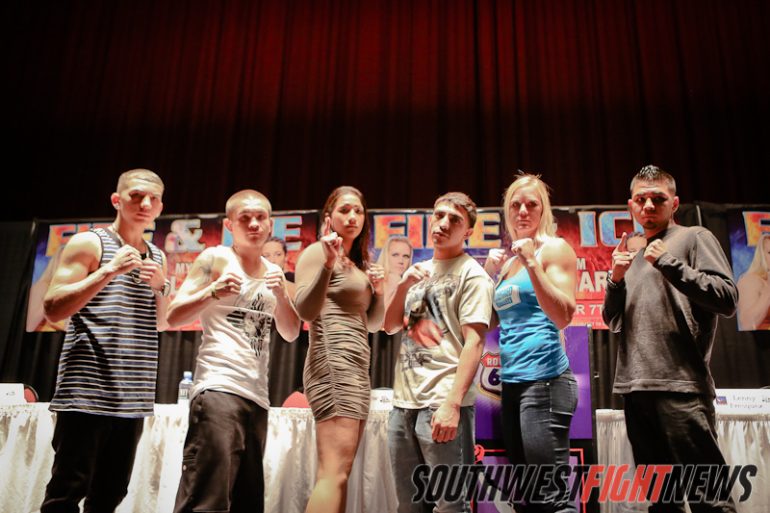 Earlier today a press conference was held by Fresquez Productions to formally announce “Fire & Ice” at the Route 66 Casino. The main event will feature pound for pound and world champion boxer Holly Holm in her rematch with the tough Frenchwoman Myriam Lamare on December 7th for the IBA and IBF Junior Welterweight titles. The first fight saw Holm defeat Lamare by decision and the rematch should be just as action packed as the first.

Before the title fight, the card will be opened up by a very intriguing match up between amateur star Jason Sanchez, making his pro debut against boxer and mixed martial arts fighter, Gene Perez (1-0 boxing, 3-4 mma) of Belen. The four round fight should be an exciting match up as both fighters are eager to get in the ring. At the press conference Sanchez said, “I’m ready to fight.” while opponent Perez countered with, “I’m coming out ready to bang in December.”

In the evening’s first woman’s bout, Albuquerque’s Victoria Cisneros (6-13-2, 2 KOs) will step in the ring to face Australia’s Diana Prazak (11-1, 7 Kos)  in a light welterweight match up. Cisneros is best known for stepping in to face champion Holly Holm on very short notice back in a 2009 event. Cisneros will bring her gritty style and big heart into the fight with Prazak who is considered Australia’s top fighter and third ranked boxer in the world in her respective weight class. Cisneros seemed very eager to compete yet again and happy to face off with another top talent, “She’s 11-1, I only fight the best so let’s do it.”

Matthew “Champ” Baca (10-0, 1 KO) will be fighting as one half of the co-main event match up against a yet to be announced opponent. Baca made news today as he was announced to be the second fighter signed by Fresquez Productions along side the evenings headliner, Holly Holm.

The light welterweight has a huge following and very high aspirations and potential ride alongside Baca heading into this bout. A very appreciative Baca said, “Without God this couldn’t be possible.” For fight fans who know of Baca they know he will be an exciting prospect to watch and he will look to put on a very entertaining bout. In closing Baca said, “I have a vision and I know what I can do.”

After these confirmed four bouts, the night will be centered around by fan favorite and New Mexico’s own born and bred World Champion Holly Holm in yet another showcase in her hometown. Standing in front of her will be a familiar face, one that is out to upset the hometown fighter and take the bragging rights of a second bout back home to France.

Myriam Lamare (20-3) is coming off a light welterweight title fight that saw her not only capture the gold, but the top ranking at 140-pounds. The first fight between her and Holm went down in January of 2009 and since that unanimous decision loss she has gone undefeated in four straight fights to earn another shot at the Woman’s pound for pound Queen. She was absent from the press conference even though it was announced she had been scheduled to be present via skype from her home town in France.

Holm (31-2-3) is widely considered to be the best female boxer in the world. Coming off the heels of a redemption fight against Anna Sophie Mathis, she earned the hard fought decision victory after losing to Mathis previously in 2011 which ended a seven-year span of consecutive victories. “The Preacher’s Daughter” is moving back down from her fight weight of 147-pounds to challenge for Lamare’s 140-pound title in hopes of capturing more illustrious gold. Holm spoke very highly of her opponent during the events first presser saying, “Lamare was one of my toughest fights, especially with her game planning. She’s the only one who had us guessing from round to round” The game planning of Lamare was spoken of by not only Holly, but also by promoter Lenny Fresquez and coach Mike Winklejohn.

Coach Winklejohn was very confident when speaking of the fight, “It is a bigger and bigger chess match each time Holly fights,” while also adding, “We are definitely looking for the knockout in this fight.”

The fight doesn’t come with a whole lot of cordial feelings. Lenny Fresquez repeatedly mentioned the feelings he felt from Lamare’s coach Lucia Ryker stating, “Ryker is obsessed with beating Holly.” Fresquez would continue with his praise of Holm, “She has fought a whose who in boxing. It was clear after the second of third year that nobody in her league.” The confident promoter also felt like Holm was much better then just the pound for pound best active boxer as he was very happy to award Holly saying “In my opinion, Holly is the best female boxer to ever walk in the ring.”

Through the talk about camps it was very evident that Holm’s team was going to be well prepared. Fresquez stated, “Coach Winklejohn puts the best gameplans together and Holly goes out and executes it.” Clearly focused and starting camp well prepared the Albuquerque team still has their work cut out for them. In her closing words Holly said of Lamare, ” I always knew I would be back in the ring with her.”

Tickets are on sale now at the Route 66 Casino and as always stay tuned to SWFight.com for coverage and updates as we get closer to the December 7th “Fire & Ice” event.