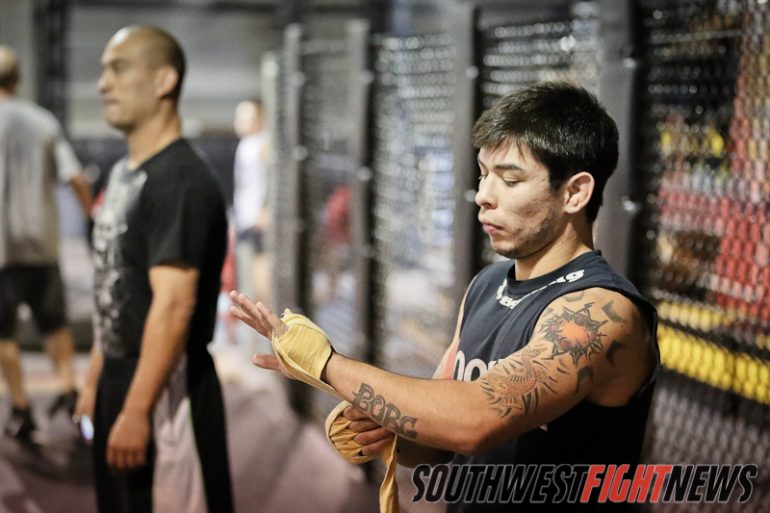 New Mexico has always been a bright spot on the mixed martial arts map, the state has bred home-grown world champions and has harbored world champions in the states many illustrious gyms. With those accolades attached to the state and its strong foundation upon the sport of MMA, it should come as no surprise that we have up and coming, young athlete looking to make waves of his own in such a promising environment.

Training out of Albuquerque’s FITNHB, Ray Borg is opening up eyes in the regions MMA scene and he is doing so through highly entertaining and dominating performances in his young but extremely promising career. At only 19 years of age, Borg has already competed inside the cage five times. Starting a month after his 18th birthday, Borg would compete in four amateur fights in a seven month span. With three rear naked chokes and one guillotine all of which came before the fight had hit one and a half minutes, Borg clearly displayed his readiness for the professional circuit.

Last month Borg would cross the line to the professional level in the August 11th King of the Cage event held in the Buffalo Thunder Resort and Casino in Santa Fe,New Mexico. Borg would be matched with Gene Perez who had five professional fights and boxing experience. To say that Borg impressed would be an overwhelming understatement.

While the fight ended up being the longest of his career, Borg would still get the impressive finish notching another rear naked choke to his resume just after the three-minute mark in the first round. Borg would show his grappling acumen as he would secure a huge slam on Perez before he would advance position and hunt for the choke.

For fight fans that may not be familiar with Borg, he started his training with the Cullum’s and their Cullum Ground Fighting system that is heralded and respected highly in this state. Brothers Abel and Jeremiah have consistently been a staple of New Mexico MMA and their pedigree of top-notch grappling has definitely rubbed of on Borg.

“I started training because I lived in Tucumcari, NM and I was originally a wrestler but the school I attended did not have a wrestling team. Then I had met Abel Cullum at some fights and he invited me to train at his gym, and I just fell in love with the sport,” said Borg. “I think my favorite part of the sport is after all my hard work and suffering through out my training camp being able to step into the cage and show case what hard work and dedication does for a person.”

Clearly, Borg brings with him a passion for competition that translated from his successful grappling experience that has seen him win in the Advanced Division of New Mexico’s Grapplefest tournament into his mixed martial arts career that is bright in potential. While his grappling game was top notch, his desire for proficient striking game garnered his interest in a big change and that came with a move to a new town and new gym.

Making the move from Tucumcari to Albuquerque, Borg now trains at FIT NHB alongside UFC fighter Tim Means and New Mexico top names Donald Sanchez and Frank Baca. If his learning curve runs at the same rapid rate it did out in Tucumcari, then the skill set he can learn from FIT NHB should see Borg as one of the faces in the wave of the new generations mixed martial artists.

Borg does not currently have anything scheduled, but stay tuned fight fans for one of the brighter young fighters in New Mexico.

[…] Borg has won four of his five professional bouts this calendar year and in doing so has cemented himself as one of New Mexico’s premier fighters and arguably one of the brightest prospects in the entire region. He started off the year with a win over veteran Gene Perez who was much more experienced than Borg who came into the bout with just one professional bout. Borg would rattle off two more wins within the King of the Cage banner and would go on to get the biggest opportunity of his young career. […]