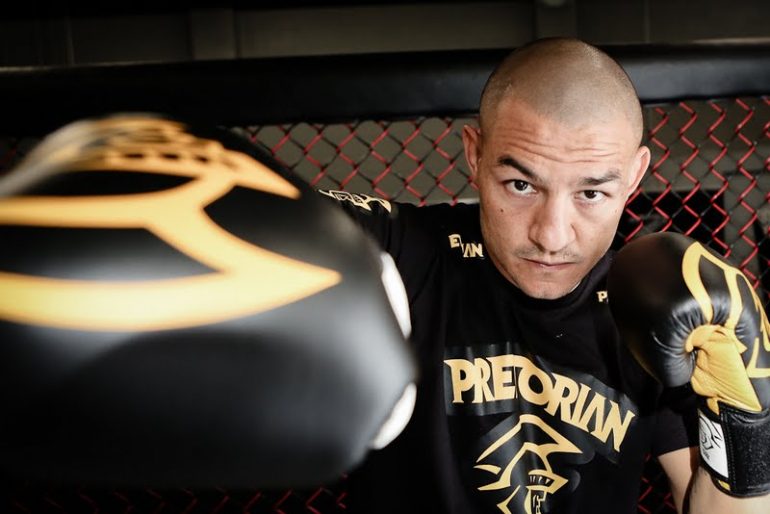 The highly anticipated event promoted by the Ultimate Fighting Championship dubbed UFC 152 headlined by light heavyweight champion Jon Jones and Vitor Belfort will go down this Saturday. The card is notable due to the promotions decision to skip UFC 151 after Jones’ original opponent Dan Henderson pulled out of the event due to injury. Many within the UFC and fans alike wrongfully blamed and criticized Jones as being the culprit for the cancellation of the entire event. Subsequently, that entire fight card led to a reshuffling of fights into other events. Jones was inserted to headline UFC 152, taking place in Toronto, Ontario, Canada.

While Jones will represent the Albuquerque based and famed Jackson-Winklejohn gym in the main event, there will be another notable name from the gym on the card that is knocking on the door to top contendership. That fighter is the recently rejuvenated and resurgent Cub Swanson (17-5), a featherweight looking to notch his third consecutive victory.

Riding high on the recent success that he has earned, Swanson will be facing a very tough and formidable opponent in bright prospect Charles “Do Bronx” Oliveira, who also will bring into the cage a three fight winning streak. At 22 years of age, Oliveira will give up six years to the elder Swanson but is far from inexperienced. Oliveira will be competing in his 20th professional bout while Swanson will be fighting in his 23rd professional bout.Their contest will be the initial bout of the pay-per-view portion of the UFC 152.

This will be Swanson’s first time on the pay-per-view side of a card while it will be Oliveira’s second.

“It’s not the pressure of being the main event or anything and you just got to go out there and set it off,” says Swanson  “That’s what I like to do. I like to get the crowd pumped up and put on a good show for the fans.”Swanson last competed in June at a UFC on FX card headlined by teammate Clay Guida. Swanson’s fight would be pure fireworks as he and Ultimate Fighter winner Ross Pearson would put on fight of the night performances that was concluded by technical knockout victory for Swanson.

Previous to that slug fest, Swanson would knockout George Roop in another entertaining battle. As his record suggests, seventeen wins with fives losses and thirteen of his seventeen wins coming via knock out or submission, Swanson is an exciting fighter with explosive power and grappling savvy.

As fans attacked Jones and the Jackson’s MMA gym via blogs and social media for the fallout of UFC 152 and continuous critique of being considered a gym of fighters with boring styles, the same platforms were littered with praise of Swanson for his exciting style.

“All the guys that they’re talking crap about; the Clay Guida’s, Condit’s and Jon Joneses, these guys put on so many good fights. You have one fight that they don’t appreciate and then, ‘You suck’,” he says defending his camp. “I’m very happy with my team, my teammates. We always come to bring a good show and my team doesn’t deserve that. Screw the haters.”

While still very early in the career of Oliveira, he should be considered a veteran of the sport’s top promotion as seven of his nineteen fights have taken place within the UFC. With a record of 16 wins to only two losses, all but one of his victories have seen a judge’s decision. Similar to Swanson, Oliveira knows one style, put it all on the line.

After a tough loss to Swanson’s teammate Donald Cerrone a year ago on UFC Live 5, Oliveira made the drop from lightweight to featherweight where he has been victorious against Eric Wisely via Calf Slicer and Jonathan Brookins with a slick Anaconda Choke.

Fans should expect a “Fight of the Night” candidate for UFC 152 as both fighters are extremely exciting and can be very fast paced. This fight is interesting as Swanson has succumbed to submission losses in three of his five fights and Oliveira is attributed with very slick submission skills.

However, Swanson should enjoy a favorable advantage in the stand up game much like teammate Donald Cerrone did. If he can keep the fight standing it should be interesting to see if Oliveira has improved his kickboxing or his transitional wrestling and if he has not, it may be a rough night as the talented striker Swanson may be too overwhelming for the Brazilian, ending the fight with powerful punches or methodical attacks.

This is a very important contest for both fighters, the featherweight division is in need of challengers for Champion Jose Aldo and riding two fight winning streaks respectively, a win may propel either into a top contender fight, one step closer to a coveted title shot. It is also one step closer for a chance at redemption in the case of Swanson, who can have another shot at Champion Aldo after losing to him via a spectacular TKO a little over three years ago.

“I’m very motivated for that. That’s been something that’s been on my mind for a very long time,” says Swasons. “(It’s) something that you always have to live with being on someone highlight reel. I’d love to get that fight back and give the crowd that they deserve.”