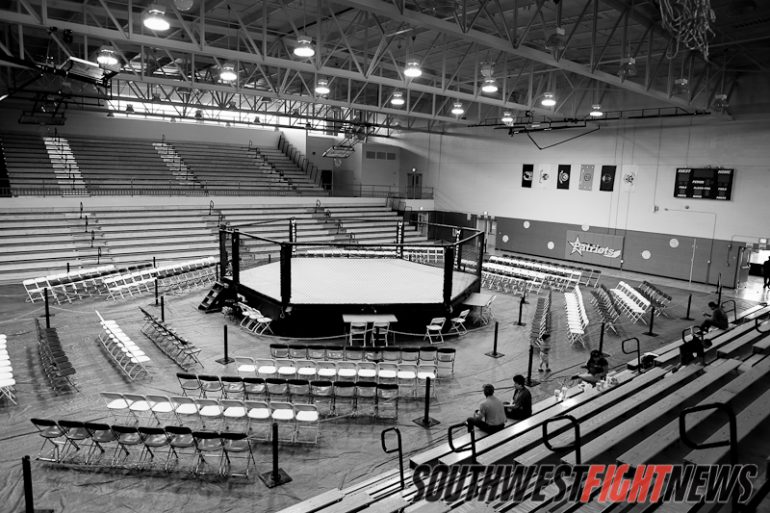 In the main event of the evening Jerry Sano of El Paso, Texas’ Bushido MMA defeated Jackson’s MMA’s George Clynes by knockout. The fight started off with both men displaying good head movement, avoiding each others advances.

Sano, was able to land several short jabs that allowed him to set up power shots that stunned Clynes. The Texan took advantage of a hunched over opponent and snuck in a solid right uppercut that knocked Clynes out cold.

“It was a feeling out process” said Sano. “I saw him keep ducking his head and just timed it and I let it go.”

In what was arguably the fight of the night, and one of the best fights in recent amateur competition, Sano’s teammate Armando Rivas edged out L.A. Boxing’s debutant Daniel Martinez.

The opening round saw the Bushido fighter demonstrate a very good ground attack which was heavily defended by Martinez‘ upward punches and armbar attempts.

Despite being on his back for a majority of the round Martinez caused a laceration over Rivas‘ left eye.

In what was a heavily contested second round, the two men implemented more exciting ground work. Rivas landed flush shots and Martinez‘ constant submission attempts including a veteran rear-naked choke that the horn ended prematurely, kept him from being overwhelmed.

Both men decided to keep it standing to start the third. Rivas worked good combinations but Martinez was able to respond with a solid right leg kick that momentarily kept Rivas at bay.

The El Pasoan controlled the rest of the round with most notably a six punch combination and a huge takedown.

Before the ten second mark, the two fighters traded two huge right hands that staggered one another. At the end of the bout many of the onlookers including press row gave the combatants a stand ovation for their world class effort and sportsmanship.

Stealing the show was 18-year-old Falon Ring who submitted Joseph Hartnell by kimura in the 10th bout of the evening. Just a few minutes later Ring was asked if he would step in and replace Juan Aranda, in the 125lb championship fight against a tough Malcolm Mitchell.

Unfortunately, Aranda was forced to pull out due to symptoms of food poisoning. The New Mexico State Commission, the ringside physician, Ring and Mitchell all approved for the fight to take place.

In typical Ring fashion, he came out very aggressive with an onslaught of flying kicks. Mitchell did a very good job of fending off the attack and used the aggression to eventually apply a deep guillotine choke off his back.

The choke appeared to be extremely deep but a scrappy Ring was able to work out of the hold and applied some effective ground and pound.

He would end the contest by quickly maneuvering into an armbar.

“I said ‘yeah’ right away,” says Ring when he was presented the fortuitous opportunity. “I was happy to know they were going to give me a title shot.”

Note: John Bindal was advised for a follow up with a physician and was not allowed to participate in the evening’s action against Levi Lucero