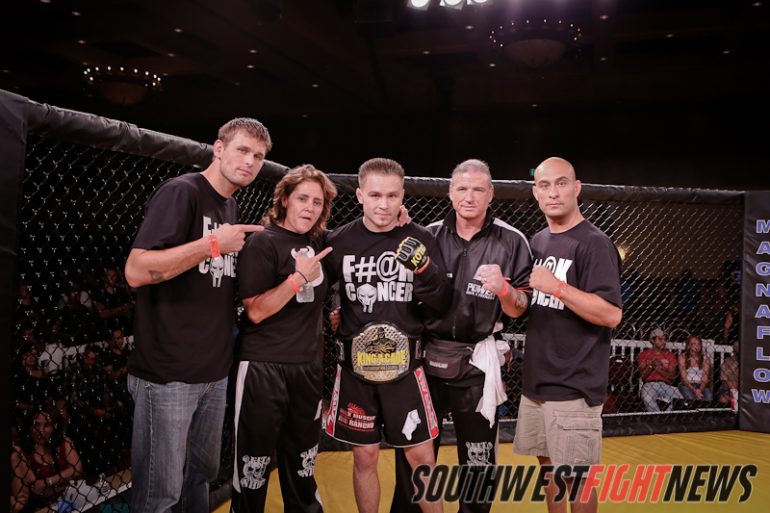 Sanchez Defends Title for 8th Time at King of the Cage: Ignite

PUEBLO OF POJAQUE., Last night at the Buffalo Thunder Resort and Casino, just outside of Santa Fe, New Mexco, hosted King of the Cage: Ignite.

In the main event of the evening showcased Albuquerque’s Donald Sanchez, who defended his KOTC Bantamweight title for a bantamweight record 8th time against Jimmy Van Horn.

The champion made his was to the cage wearing a F#@K CANCER costumed made t-shirt from teammate Gerald Lovato’s Hip Hop Sun brand, in support of Sanchez’ grandmother who had been suffering from the disease.

Sanchez entered the cage knowing his grandmother was on her deathbed.

At the start of the fight, the champion came out very reserved waiting for the challenger to make the first move.

Wanting to take the fight to the ground Van Horn, would jump to his back looking to entice Sanchez to a ground battle.

The veteran wisely waited for Van Horn to stand each time. This led to Sanchez catching with a short right hook that dropped the visiting Montana fighter to his knees dazed.

After standing back up to briefly skirmish Van Horn, was caught with a right uppercut that dropped him once again, this time making enough contact to force him to tap as soon as he hit the canvass.

The match was stopped at 02:32 of the first round awarding Sanchez his 15th victory with the KOTC promotion.

In the co-main event of the evening the home-towner Josh Montoya displayed very good poise and jiu jitsu against another Montanan Frank Morris.

The first displayed a contrast of composure between the two fighters A very relaxed Montoya spent much of the round working a very effective defensive style to Morris’ aggression.

The aggressor threw three spinning left back fist followed by a straight right which ultimately Montoya was able to time and take the match to the ground.

Montoya even attempted a rare omoplata, a submission that he has never been victorious with.

Early in the second, Montoya landed a solid right kick to the body of a grounded Morris; the sound resonated through the venue.

Taking advantage of the downed opponent Montoya was able to eventually engage in a full mount and obtain his first technical knockout career victory.

In the fight of the night, Adrian Cruz and Jesus Urbina thrilled the crowd both standing and on the ground.

Both men bad significant moments in each of the rounds but it was Cruz’ more precise striking and ability to maneuver out unfavorable positions on the ground that allowed him to come out with unanimous decision.