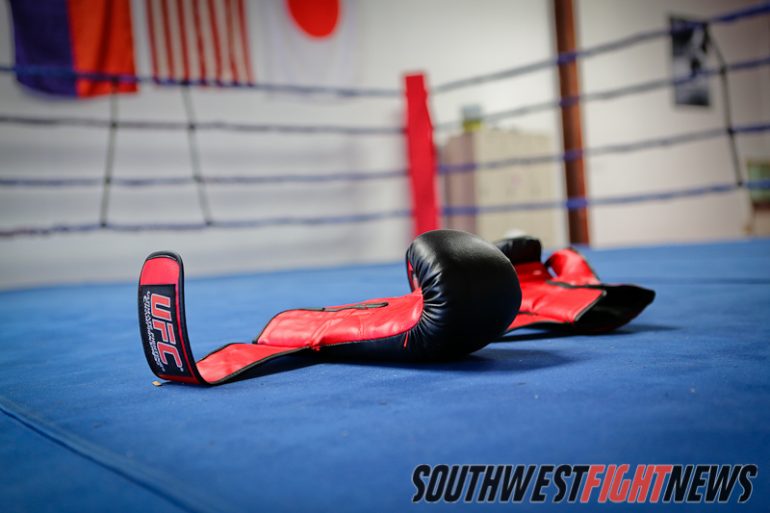 Gonzales, unblemished in his young career has not seen action since December of 2010 where he showed very solid striking to win via technical knockout in just over two minutes. Perez on the other hand will be fighting in his third fight in three months, going 1-1 in the span which included a knockout victory in July.

Perez has only suffered defeat in his career by way of submission and has only tasted victory by means of knockout so this fight may be a possible fight of night candidate as the crisp striking of Gonzales may match well with the game Perez. On the other hand, Perez may need to show an improved ground game should Gonzales pursue a fight there.

Staying with the theme of Albuquerque fighters competing against one another, a featured bout between Lynae Lovato (0-1 pro, 1-0 amateur) of Lovato’s Total Fitness and Jackson-Winklejohn’s Emily Peters-Kagan (0-0 pro, 4-2 amateur).

Both women will bring with them very contrasting styles as Lovato will bring the Lovato wrestling bloodline with her against Peters-Kagan who is an accomplished grappler. The ground skills of both women may very well be even and if so look for this fight to be a stand up affair. Peters-Kagan may have the advantage in that she is slightly more experienced and has notable and accomplished teammates in Michelle Waterson, Heather Clark and Julie Kedzie.

Matched up in the featherweight division to round out the pro section of the card is Jackson-Winklejohn representative Robbie Guiterrez (1-0 pro, 3-1 amateur) and Adam Knowles (0-1 pro) fighting out of Albuquerque as well.

Guiterrez will carry a lot more experience into the cage as Knowles as only one bout to his record, while Guiterrez has not only fought for the Jackson’s MMA Series in the past he has also competed for Rage in the Cage and Shark Fights. Experience should be a factor in this one with Knowles having an opportunity to show big heart by working towards an upset.

With a late mix up to the card, Jackson-Winklejohn’s Andrew Tennison (2-0 amateur) will have to wait for a redemption fight avenge a teammate’s loss to Jerry Sano (2-1 amateur) as Sano was pulled from the card.

This bout may still be very similar to the original match up even thought the two fighters are more similar in styles; Chavez comes from a grappling school and really implores a submission based mentality.

Across from the cage, will be an amateur fighter in Tennison that has won both amateur bouts by leg locks. This fight may be decided by the fighter who implements his plan the best, whether that means both look to keeping the fight standing or who is more slick in their Jiu Jitsu.

Many who follow the Jackson’s MMA Series may remember Ricky Esquibel from the Jackson-Winklejohn gym sponsored contest hosted by The Edge radio station. Esquibel would win the inaugural Edge Fighter Challenge Championship this past October. Sands representing J5 MMA is looking to bounce back from a loss just a few weeks ago.

Sands showed strong wrestling and powerful slams in his last outing, while Esquibel would win his fight impressively showing solid clinch work and some takedowns of his own. This bout may be a case of who can set the pace, as Sands may look to shoot in for the takedown and Esquibel looking to keep it at range standing.

Representing the Jackson-Winklejohn camp, John Sparks (4-1 amateur) will look to remain undefeated under the Jackson’s MMA Series banner after three consecutive victories under the banner. A well seasoned amateur, Sparks will be matched up with New Mexico native Jacob Aguirre (4-5 amateur).

The fight should be an entertaining one as Sparks is a well rounded developing fighter who has won all his fights through submissions but has shown throughout the fights he is formidable in his stand up. Aguirre will bring with him experience which could benefit him in the fight if it hits the later round. A veteran’s savvy can never be overlooked so expect these guys to put on a very entertaining show.

Staying true to the definition of a fighter, Jesse Jaramillo (5-4 amateur) has shown through his career that he is going to knock you out or go hard trying. With five wins coming by way of knockout or technical knock out and all losses coming by way of submission or decision it is very apparent what Jaramillo is trying to do. Attempting to derail those plans, Rosales‘ Dorian Dixon (2-1 amateur) will be showing his own arsenal in what could be a war on the undercard.

Dixon has fought in several kickboxing tournaments and has shown his proficiency in the stand up game. With very solid kicks to the head and body, it will be interesting to see if Dixon wants to fight Jaramillo from a distance or if he allows Jaramillo to get inside. If Jaramillo gets past the legs of Dixon, the fight should be a solid brawl from start to finish.

Fernie Garcia (2-1 amateur) is coming to Albuquerque, New Mexico from neighboring Texas and he will have the task of fighting what should be a popular undercard opponent. Jackson-Winklejohn’s Eric Dodson (0-0 amateur), brother of The Ultimate Fighter Season 14 Bantamweight winner will be making his first appearance in the cage at the Jackson’s MMA Series.

Garcia will be representing Bushido MMA and has won with submissions in his latest bouts. Most recently in early August, he fought in Gallup, where his gym went 4-0, earning a victory over a New Mexican opponent. He will look to do the same against Dodson. It will be very hard to anticipate Dodson’s first time out; he will come fully prepared no doubt as he has a very solid camp behind him.

One key component we can watch for in this bout is if Garcia’s experience gives him an upper hand over a debuting Dodson. Undoubtedly, both fighters are sure to leave it all in the cage Saturday night.

Representing Jackson-Winklejohn’s Lorna Johnson will look to get some MMA experience under her belt as she will be facing Alida Gray (3-1 amateur) out of El Paso, Texas. While Johnson gives away experience in the mixed martial arts world, she will bring with her the experience in kickboxing.

Gray is skilled in numerous areas, as she has won by way of technical knockout and submission. After four fights, this will be her first journey out of Texas to compete. Johnson, will look to bring her fast paced style from kickboxing into MMA. She has already won fights by out hustling opponents and that very well could be the deciding factor in this match up.
Andrew Tenneson Interview
[youtube id=”iKHQN7CoAio” width=”600″ height=”350″]
Jon Sparks Interview
[youtube id=”wPBMZBZAQsU” width=”600″ height=”350″]