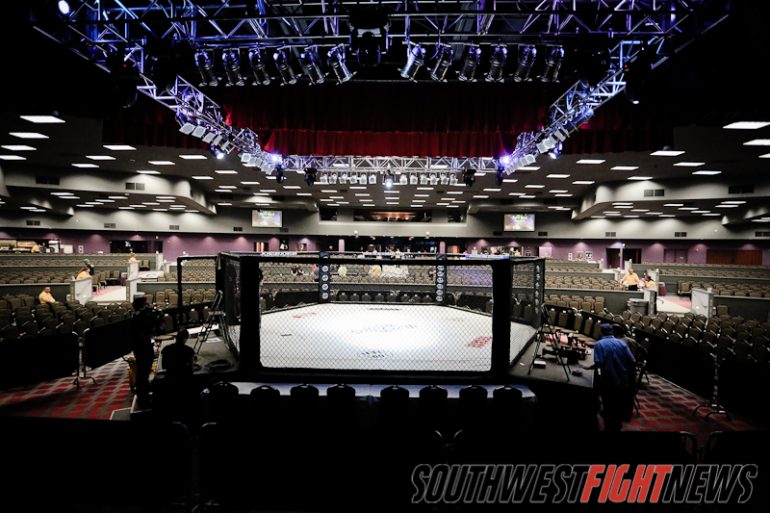 On Saturday September 8th, the Jackson’s MMA Series will take over Tingley Coliseum, for its ninth installment of the popular promotion based out of Albuquerque, New Mexico. Typically filled with Jackson’s-Winklejohn fighters, the card will be highlighted in the main event with a match up of two notable local fighters, Frank Gomez (10-5) and Mikey Lovato (10-3).

But the question is, why should you care? I will give you the three reasons why this event is worthy of your attention.

This will be the first time that the Jackson’s MMA Series pins fighters raised in Albuquerque against one another in the main event. Gomez is a 2004 graduate of Sandia High School and former New Mexico High School State Wrestling Champion at 145 pounds, taking top honors in 2003. Lovato was a three time New Mexico State Wrestling Champion from 1994-96 at 103 pounds. He was also the first wrestler from the state to ever capture a national title in 1996.

The most compelling reason is that both of the headliners are coming off of back-to-back losses which means if they want to ensure their relevancy in the sport is secure, they both have to be as hungry as they have ever been to win. This means that desperation and heart will have their roles in the bout which all but guarantees the emotional requirements to be an epic and downright home run of a fight.

Frank Gomez, representing the Jackson’s-Winklejohn gym, comes with a plethora of MMA experience. Gomez was once a highly touted title challenger in the now defunct World Extreme Cagefighting (WEC) promotion. More recently, he has fallen on rough grounds after losing a one sided decision to end his WEC run. With a record of 10-5 as a professional, Gomez is 2-3 since that loss and currently staring at a two fight losing streak.

Mikey Lovato, is a true ambassador for the sport inside his stomping grounds of Albuquerque, New Mexico is in a very similar situation. Fighting out of the Lovato Total Fitness gym he also is currently on a two fight losing streak. While his record still speaks volumes for his success at 10-3 as a professional, Lovato was overmatched in a stoppage loss to another Jackson’s-Winklejohn fighter, now Belator signee, Travis Marx last September.

In this sport, short term memory is rampant for MMA fans. Not many people will remember Gomez at 6-0 fighting Scott Jorgensen, perhaps for his crack at a title bout, or that Lovato headed into New Jersey at 10-1 looking to beat another touted prospect.

What most latch onto is failure and both of these fighters know very well that to keep their careers promising and on the track forward that they need to show up on September 8th to win and look impressive doing so.

I can’t speak for anyone else but when two guys with their backs against the wall are about to compete in close combat, I expect to see fireworks.

A very interesting aspect of the main event, the reach and height advantage

Typically, while breaking down fights one of the most common themes will be each fighter’s styles and how they compare or contrast. The most common example being when a striker is paired with a grappler and how each ones skills would translate the best. In this fight however, both fighters do have similar styles but there is a big disparity in the stature between them.

Frank Gomez is very tall for a competitor in the Bantamweight weight-class, standing in the 5”9’-5”10’ range and like many others, cuts weight to the make the 135 pound limit. Lovato by contrast could easily compete at Flyweight (125 pounds) as he most recently weighed in 4 pounds lighter then his contracted weight of 135 pounds against Travis Marx. He also is going to enter the cage nearly eight inches shorter than his opponent.

While Lovato is on paper suited physically better for flyweight, the size may not be the disadvantage one may think. It completely depends on each fighter’s game plan heading into the bout.

The striking should favor the taller and longer fighter, as a simple jab can be used to really establish a comfortable range. With full extension in strikes Gomez should be able to fight in a range where only he can hit Lovato without too much danger from counter strikes.

If he can establish this range he also dampens the effectiveness of Lovato’s strength, his wrestling. Lovato will have to choose between fighting through the distance, putting himself in danger of strikes on the way in or shooting his takedowns from a further distance. The risks are then counter knees and uppercuts as well as making it very predictable for Gomez to defend.

However, fight fans should not count the “Burque Bulldog” out. After all, there is a reason Lovato has come this far. He knows very well his opponents length and can very well use his size to gain leverage and get under a defending Gomez to secure takedowns. In wrestling and grappling we recognize leverage as being a key component and Lovato’s wrestling acumen is savvy enough to show why being closer to the mat can work wondrous for a takedown. Gomez has fallen in defeat in 3 of his last 4 losses by losing the fight on the ground, which is where Lovato undoubtedly will want to fight.

The game plan and execution alone should be fun to watch, however throw in the fact that these two veterans of the sport will try to use their own size disparity will make this an intriguing fight.

Aside from all that, supporting our locals should be a priority and a fun night of mixed martial arts action should be on everyone’s calendar on September 8th.

[…] Frank Gomez vs. Mikey Lovato (Lovato Out Due to Injury)(Article) Frank Gomez vs.  Aaron Cerda  (article pending) Hunter Tucker vs. Nate Patterson Gonzales vs Perez, Kagen vs Lovato, Gutierrez vs Knowles Tenneson vs Chavez Esquibel vs Sands, Sparks vs Aguirre, Jaramillo vs Dixon, Dodson vs Garcia. Johnson vs Gray […]