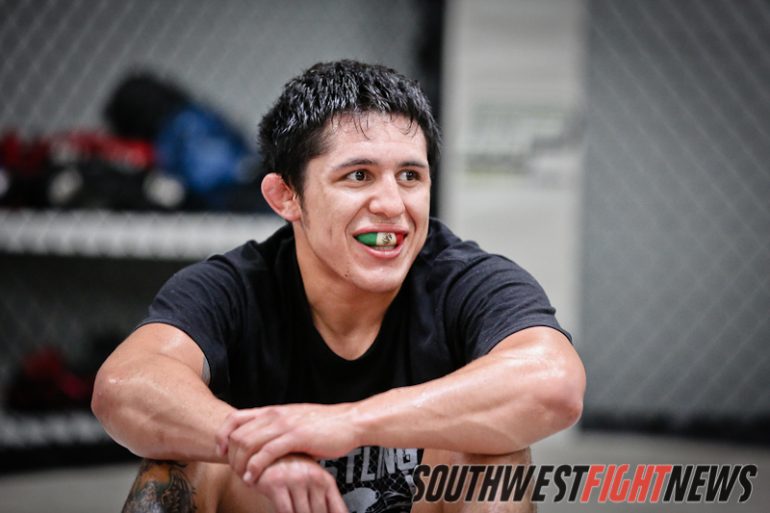 When Erik “El Goyito” Perez (11-4) steps into the Pepsi Center’s octagon at UFC 150 in Denver, Colorado to face Ken Stone (11-3) Saturday, it would be as though he never left his childhood bed in Monterrey, Nuevo León, Mexico.

“I remember going to bed and not being able to sleep,” says Perez. “It was my dream. It would take me two hours just to go to sleep thinking about that. I’d ask God, to make it one day.”

His trip to the Ultimate Fighting Championship was one of self-determination. At the age of 14, Perez took up the Chinese hand-to-hand self defense system known as Sanda.

He credits the art for assisting him through his teenage years and ultimately leading him down the path that he currently continues to follow today.

“I was an explosive child,” explains the 22-year-old Perez. “I had to do something to calm down. Thank God; Sanda saved me.”

There is where he earned the nickname “El Goyito”.

The name ‘Goyo’ is an abbreviation for the name Gregorio. The same manner in which Jack is the diminutive for
Johnathon. The suffix -ito is added to make the name even more diminutive. And it was merited, as a baby-faced Perez was fighting against men twice his age in Muay Thai tournaments.

Despite coming from a country where boxing is king, he did not solitarily pursue the sport instead deciding to participate in as many styles as possible. He was a sponge when it take to acquiring new skill sets.

Surprisingly in his youth, Perez did not have any MMA fighters that he looked up to or emulated. He contributes that to the lack of countrymen that were involved in it at the time.

Three fighters however did stand-out for him: Ramon Dekkers, a dutch Muay Thai fighter and in boxing Mike Tyson and Juan Manuel Marquez.

After class in high school, he would make the three hour bus ride from the Americanized city of Monterrey,
across the United States’ border to McAllen, Texas where he trained with now Jackson’s MMA coach Mike Valle.

Spending three-day weekends and any vacations or free time with Valle, at the McAllen gym, Perez would train in kickboxing and MMA. It was the Texan who introduced Perez to Greg Jackson via a letter of recommendation when he was 18-years-old.

“One day Mike Valle asked me if I wanted to go train with the best team in the world in New Mexico,” recounts Perez.

The same year that he moved to Albuquerque, he went professional in MMA losing his first two fights but since then he has posted in impressive 11 and 2 record.

On Saturday, Perez admits that he will have his hands full
with Florida’s Ken Stone whom he considers a “complete fighter.”

To prepare for the contest Perez has been training alongside Jackson’s teammate Donald Cerrone, in Veil, Colorado training at jiu jitsu gyms in Denver, while simultaneously getting acclimated to the mountainous air of The Centennial State.

Cerrone, himself will also be featured on the UFC 150 card against former teammate Melvin Guillard, in the co-main event of the evening.

The Erik Perez and Ken Stone match is slated as the second fight of preliminary section  of the card live on FX.

Check out our interview with Erik “El Goyito” Perez. The interviews has been transcribed and translated into English.
[youtube id=”yrHySMv_hKU ” width=”600″ height=”350″]

[…] Erik “El Goyito” Perez set the bantamweight knockout record with a swift finish of Ken Stone at 0:17 in the first round. Be sure to check out our pre-fight interview (click here) […]