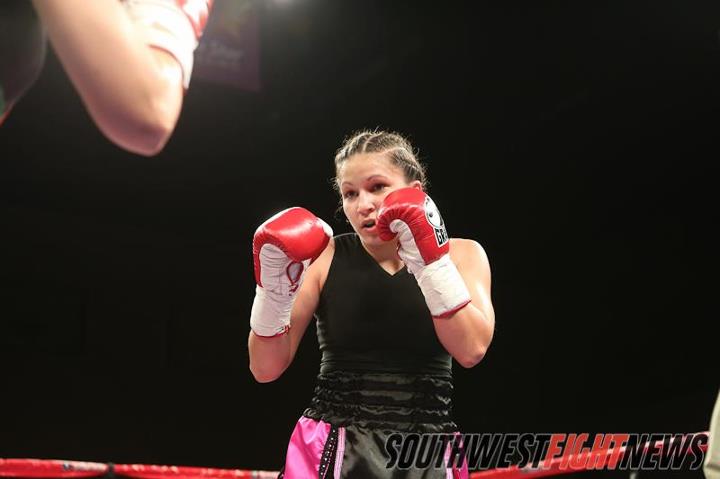 This Saturday night in Pueblo, Colorado, Brandi “Babidoll” Montoya fighting out of Rosales Kajukenbo Karate, Kickboxing and Boxing, will be facing Chantel Cordova in the main event of Cordova Productions‘ Colorado vs. New Mexico. The card will include a total of four fighters from New Mexico.

Before the bout takes place Montoya will be placed in an awkward situation.

On Friday morning, she will be flying from Albuquerque to the Denver International Airport. Her transportation to Pueblo will be provided by an unlikely person, Chantel’s mother Sherry Cordova.

Sherry is the promoter of the event and part of her duties include that Montoya, the only New Mexico fighter on the card be flown to Colorado by the promotion, makes it to her hotel room and has all the necessary commodities.

A few hours after she arrives Montoya will be weighing in for her contracted 112lb (+/-2)match.

“It’s gonna be awkward,” says Montoya “Especially since I’ll be pretty hungry and pissed off. It’ll definitely be awkward. I try to stay cordial with everybody and I’ll be polite to her as long as she is to me. Other than that, I’ll just put my headphones in and enjoy the ride.”

In Cordova, she will be facing a former world title challenger, who fought for the IBF Flyweight crown early in 2011, where she lost by 4th TKO.

This will by far be the most experienced opponent Montoya has ever faced in her young career. Cordova has as many career bouts as Montoya’s last three opponents combined.

The Coloradoan will also be participating in her first fight in nearly 11 months.

Despite her opponents experience Montoya is relatively at ease and mentally prepared for this fight. Traits she attributes to her martial arts background in Kajunkenbo which she has been participating in since middle school.

Montoya is also no stranger to the big stage, as her last fight was nationally televised on the Spanish-speaking network Telefutura. The contest was a rematch against Natalie Roy, whom many ringsiders felt Montoya defeated in her professional debut but lost a majority decision.

Familiar faces will be accompanying Montoya at the weigh-ins and the fight. Fellow New Mexicans Jesus Correa Jr., and siblings Amanda and Arturo Crespin will be featured on the undercard.

“Being able to talk to them while sitting in the dressing room ready to fight I’ll have them there to help me keep my mind at ease,” says Montoya.

The action takes place at the Pueblo Convention Center this Saturday at 6pm. Tickets are still available and are priced at $25 for general admission, $35 for ringside. Table seating is also available at $50 a seat or $400 for a table.

Tickets can be purchased by calling or visiting the Pueblo Convention Center or by contacting Sherry Cordova at 719-821-9756.