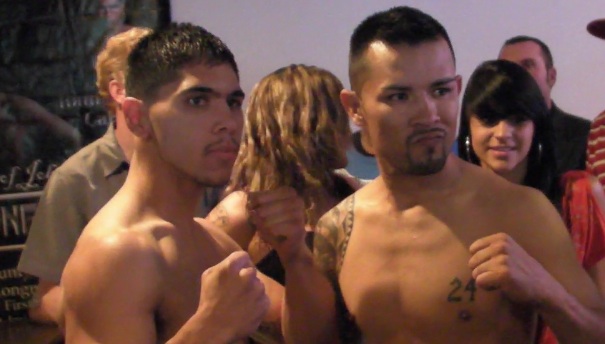 The estimated crowd of about 500, was heavily in favor of Carrillo but a small contingent of Torres fans made sure they were heard.

During the first round, Torres worked the body with effective jabs and hooks. An uneasy and off-balanced Carrillo was also caught with several hard shots to the chin.

In the second stanza, appearing to settle in, Carrillo, was a lot busier working effective distanced punches. The Albuquerquean made the round a close one with consistent four-punch flurries.

The middle rounds saw no stop in the action between the two men.  A very aggressive Carrillo, came out to force much of the action. For most of the round, he had Torres backing up, who himself was unable to counter effectively.

Turning the match into a slugfest in the fourth, Torres successfully slowed Carrillo down by bullying him in the clinch and against the ropes. The road fighter also did a better job of blocking and avoiding punches with constant pacing around the ring.

Within the first 10 seconds of the fifth round both men matched each others 10-punch flurries. It was just after the second flurry that Carrillo used a pair of lazy jabs to set up a huge right-left-right combination that rocked Torres. If it were not for one of the lower ring ropes Torres, may have gone down. A more cognizant referee would have issued a standing 8-count.

Torres, would spend the following two and a half minutes of the round holding and bouncing around the ring attempting to gain his composure.

Despite appearing to be on somewhat shaky legs Torres, would manage to stagger Carrillo with first a left hook to the chin then after three skirmishes the Longmont native would walk into a hard right jab. As the ten second mark hit the men would exchange with Torres landing the majority of the scoring.

In a very competitive fight the judges final scorecard was a surprising one. The scores read as follows: 59-54, 58-56, 59-55 in a unanimous decision for Carrillo.

The first scorecard did not award Torres, one single round. The judge, also for some reason, deducted a point from Carrillo. The second judge’s card was respectable and the third judge only awarded Torres, one round.