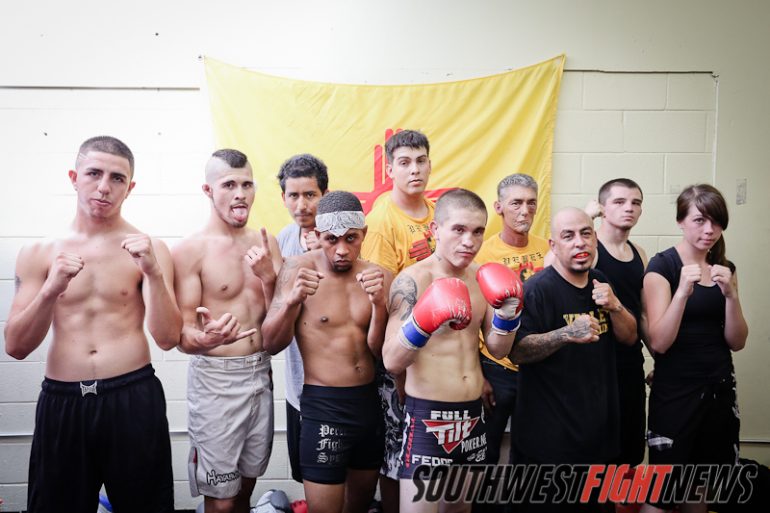 As the Mixed Martial Arts Mecca, Albuquerque has dozens of successful gyms. To the most southern point of the city’s metropolitan area, there is a small gym looking to establish itself.

Perez Fighting Systems in Belen, New Mexico, is the true definition of a grassroots effort. The gym went from owner Gene Perez’ two-car garage, to a small 4-room building on an office strip.

“We started off with just a cage,” explains Perez. “We started working it through; trying to make money and started putting things together.”

In a city with a population of just over 7,000 residents, Perez, along with the help of striking coach Ken Harding, has established the only MMA gym in Belen.

It has nine fighters who are consistently participating in amateur and professional events around the Southwestern United States. Many of it’s fighters are currently training for their respective August 4th bouts at the MMA Summer Showdown in Gallup.

“We all like to fight. It’s all about fun though,” says flyweight and King of the Cage veteran Malcolm Mitchell, he will be participating in his first title fight at Gallup show.

Besides the adults at the gym, a youth program slowly being established.

“We have scholarship programs where if a kid can’t afford the monthly fees, a local company can sponsor them,” says Ashley Horton, Perez‘ girlfriend and the gyms’ co-owner. “In return, the companies get placed on banners or fighter’s shorts in events we’re a part of.”

As Belen’s only mixed martial arts gym, there is a communal and even familial ambiance about it. Beside the two main workout rooms, the building has an office and even a playroom for the children of the gym’s patrons to use.

On the day that we visited, the gym was celebrating a child’s birthday. As a gift, the child requested that his entire family participate in a gym session with him.

When one of the parents offered cake to everyone a fighter responded, “Is it fat-free?” 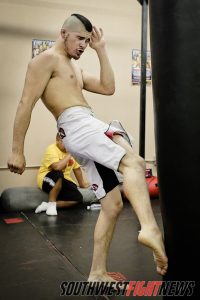 “We like how tight everyone is with each other,” says Levi Lucero. “That is the reason why we drive out here.” He and his son Elijah, make the 40-minute drive from their home in Albuquerque to Belen gym several times a week.

The gym also offers fitness classes during the day where people of all ages attend. The front of the gym happily displays before and after pics of gym at 185lbs and his current weight of 125lbs.

Along with the community support, the gym is gaining recognition as a result of their owners accomplishments.

Within a span of three weeks Perez himself won his professional boxing debut on the Holly Holm-Anne Sophie Mathis undercard, and defeated a very popular Grant Hobbs, via technical knockout at the King of the Cage event at the Sky Ute Casino.