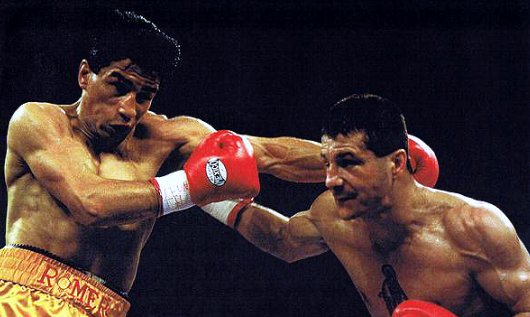 In what is widely considered the greatest sporting moment in New Mexico’s history, a packed Thomas and Mack Center in Las Vegas hosted the classic boxing match between the late Johnny Tapia, and Danny Romero, in a Super Flyweight unification title fight.

Both men came into the fight with incredible credentials. The 30-year old Tapia’s, record was 40-0-2 and was IBF Super Flyweight
champion, a title he had won in Albuquerque four years before. Having just celebrated his 23rd birthday that week, Romero, was 30-1 with the WBO Super Flyweight championship, a title he claimed in Las Vegas.

Both men displayed incredible technical skill and thrilled the crowd of over 11,000 die-hard fans.

Referee Mitch Halpern did a phenomenal job officiating the contest despite the implications of the contest and the bad blood that existed between the two camps leading up to the fight.

After many accidental head-butts and unintentional fouls Tapia would extend his left hand to greet Romero, who was uninterested in the pleasantries.

There were three main shifts in the fight. Tapia controlled the early rounds with his speed but Romero was able to rally in the middle stanzas with good hard shots. In the end it was Tapia’s speed, footwork and experience, having gone past nine rounds 10 times in his career up to that point compared to Romero’s three, that ultimately allowed him to pull away.