Trout Defeats Rodriguez by Unanimous Decision, Is Canelo Next? 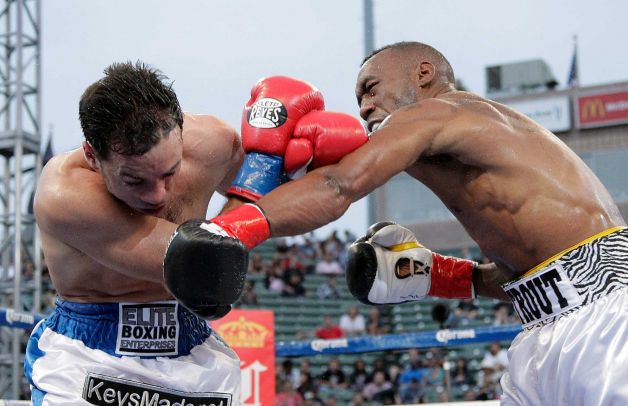 CARSON, C.A. – It was supposed to be a coming out party for Austin “No Doubt” Trout in his WBA Super Welterweight contest against Delvin Rodriguez. As they say in boxing “styles make match-ups”. The contest was the typical, slow paced, very good technical fighter in Trout, against a puncher-brawler in Rodriguez; southpaw versus orthodox battle.

Neither fighter fell trap to the other’s style. Trout displayed a very good exhibition of slickness avoiding many of Rodriguez’ power shots. He initiated the action throughout the fight by starting combinations off with a lead right jab to the body.

Delvin used this to sporadically land hard short shots, catching Trout as he lunged in for the body punches.

CompuBox numbers showed that Trout greatly outnumbered Rodriguez in punches thrown by 699 to 440 and punches landed 151 to 89.

During the contest there were three different distractions amongst the crowd. Early on when rapper 50 Cent walked in to the venue, followed by appearances from former welterweight champion Victor Ortiz and the loudest ovation came as Saul “Canelo” Alvarez walked into the ring.

In the post fight press conference, Golden Boy CEO Richard Schafer mentioned that Trout is being considered as one of the three possible opponents for Alvarez.

“Canelo wants to become the undisputed junior middleweight champion, that would obviously be through Austin Trout,” said Schaefer. “We will be discussing among ourselves then have conversations with Austin’s team to see if that fight can be made”.
[youtube id=”v224KZjI-yo” width=”600″ height=”350″]

In the main-event of the evening Lateef Kayode and Antonio Tarver fought to an entertaining draw. Many at ringside felt that the contest could go either way.

[youtube id=”p2SHfKTTGpY” width=”600″ height=”350″]
“Kid Chocolate” Quillin. With the victory Quillin solidified himself as a legitimate threat to challenge Sergio Martinez for the middleweight crown.

In the battle for the vacant IBF Batamweight title Leo Santa Cruz displayed a poise and technique far beyond his 23-years indicated against undefeated Ugandan lightweight Vusi Malinga. Almost a wipeout on all three judges cards; one judge award a single round to Malinga. This was the first time Santa Cruz says he had ever fought on television. It certainly will not be the last.

Sharif Bogere knocked Manuel Leyva down twice, once in the first and then in the second. After the second knockdown he went in for the kill. After several unanswered shots the referee was forced to stop the contest.

In his professional debut, welterweight Juan Reynoso (1-0) of Tampa, Florida out pointed Beau Hamilton (0-2) of Montague, California by unanimous decision (40-36, 39-37).