For the second time in his mixed martial arts career Tim “The Dirty Bird” Means (17-3-1), will be stepping into a UFC octagon. This Friday night Means will be taking on Justin Salas (10-3) on the UFC on FX 3 card.

Their fight will air on the FuelTV portion of the preliminaries. 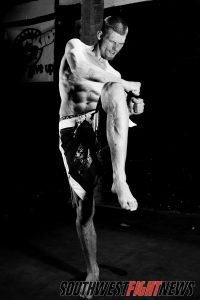 Fighting out of Fit NHB in Albuquerque, New Mexico, Means, is riding a world class streak of only one loss in his last 17 matches. “I don’t really look at the win streak” “I have to get in and put work in everyday.”

The former King of the Cage Lightweight and Junior Welterweight Champion, Means, took his first fight in the UFC against Bernardo Malgahaes in February on short notice.

He has had much longer to prepare for this contest against Salas. A whole two months.

Coincidentally, Salas and Means both made their debuts on February’s UFC on Fuel TV: Sanchez vs. Ellenberger. Both won their respective bouts convincingly.

Fighting out of the same gym as Nate Marquardt and Shane Carwin in Wheat Ridge, Colorado, Salas is considered a good striker and a very talented wrestler.

“I know he thinks he’s a good boxer, he’s a good wrestler; good athlete; likes to grind out fights. I’m gonna get in his face and test him,” says Means.

Means joined us to discuss his fight against Salas and to also talk about his past security work at a local Albuquerque bar.