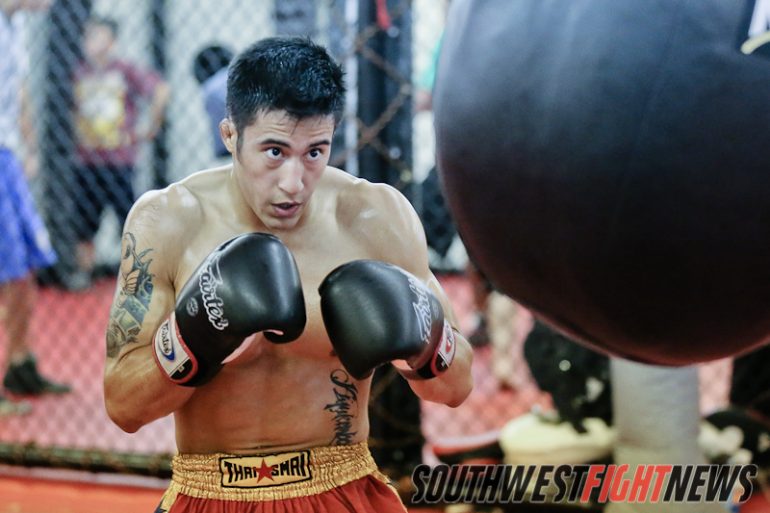 “I don’t know if it’s really hit me yet,” said Sanchez.

The 2009, Valley High School graduate admitted that the tryouts were both a physical and mental test. The auditions started at 10am, with the lighter weights doing mitt work.

All 100 competitors had only three minutes to impress the XFC representatives on the mitts. The bantamweight group that Sanchez belonged to, was grouped with other hopefuls from the flyweight division. A total of 30 men were in this sub-135lb group.

After an hour of sitting and waiting for all the weights to wrap up the mitt work, cuts were made; jiu jitsu evaluations took place thereafter. The format was a four-man mini tournament where Sanchez, submitted his first opponent twice eventually making it to the next round.

Following the jiu jitsu exhibitions was a wrestling assessment. Here, Sanchez, was forced to face Jeff Emil Haddad, an undefeated fighter, who trains out of the same building that the tryouts were being held at. The scoring for this section was based solely on takedowns. Haddad was able to out duel Sanchez.

The day continued on to scrambling drills where the fighters were put in disadvantaged positions. They were scored on their ability to improve those positions and/or being able to escape from them.

In the final part of the 11-hour day Sanchez, would again be paired with Haddad, for a sparring session.

“Toward the end of the day, I just wanted to go home,” says Sanchez. “I knew this was it and I wanted to take care of business in the cage.”

He was able to redeem himself against Haddad in sparring, making a great lasting impression on the XFC evaluators.

Sanchez, was the only fighter awarded a five-fight contract. An additional four fighters, two male and two female, were given one fight contracts.

Not a bad 3-day weekend.

So what’s next? The XFC and will now have to negotiate with Sanchez and his camp.

“We’re going to have to make some arrangements since I’ll be traveling from New Mexico out east for every fight,” says Sanchez. “We’ll have XFC talk to Grandmaster (Melcor Chavez) and I to arrange all that in my contract.”

Catch Monday night’s airing of Inside MMA on HDNet, the same network that airs XFC cards. They will have a piece on this weekend’s tryouts as well as an interview with Sanchez.

Dude aid a beast we were watching him the whole time…. Looking to sponsor him for sure

[…] the Xtreme Fighting Championships (XFC), an organization who signed Sanchez for two years after he won an open tryout held by company in […]