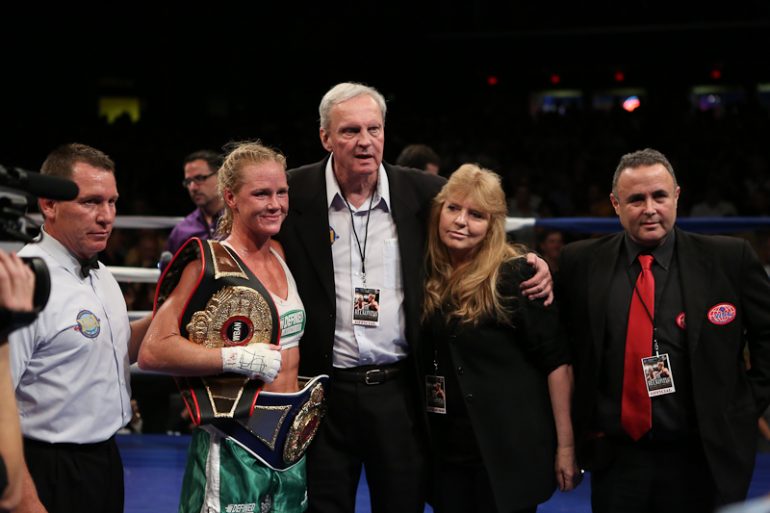 Last night, at the Route 66 Casino in the Laguna Pueblo, Albuquerque, New Mexico’s Holly Holm (31-2-3) defeated the odds and was able to outbox and outlast frenchwoman Anne Sophie Mathis (26-2).

From the onset, the anticipation and anxiety was at a climax as Holm’s, uptempo Irish-themed entrance music played twice and she was nowhere to be found.

An uncomfortable silence spread amongst the crowd.

Finally, as 9:40 local time hit, the music officially announced the entrance of the hometown challenger and in typical fashion Holm, skipped and hopped her way to the ring.

The champion Mathis, entered to an overwhelming amount of boos with scattered cheers.

Noticeably, the ring, 20 feet by 20 feet, was larger than their first contest where it measured 18 by 18. It was later acknowledge by the Mathis-camp, in the post-fight press conference that the ring-size was not even considered for the contract.

The contest started off with both woman sizing each other up. Holm, danced back and forth as Mathis, was extremely aggressive.  It was clear that Holm, had learned from her first fight and would not be looking to exchange with the champion.

Rounds two and three saw a very active Holm, closing the distance on Mathis, by jabbing and then holding. When she would punch from long-range she would immediately retreat and scrabble away from danger when she was not engaging. The highlight came in the third, when Holm, landed a right uppercut, following it with a left cross and four consecutive fading jabs.

Multiple “rabbit punches” were unseen by the ref.

In the middle rounds, the frustration was evident in Mathis’ face. She took the initiative to time Holm, with brutal hooks and uppercuts as Holm, would come in to jab then attempt to grab Mathis. The frenchwoman would then sneak in body punches and rabbit punches. Referee Jon Schorle warned Holm, only once of the holding but never reprimanded Mathis for the illegal punches.

As the fight came to it’s conclusion, Mathis appeared to be becoming jaded. Having only spent 2 weeks in Albuquerque’s, 5,300-plus feet of elevation, she later admitted that she had trouble with her conditioning. For the previous fight she had spent an entire month trying to become acclimated with the air difference.

When the final bell rang two different emotions were expressed; jubilation in Holm’s corner and vexation in Mathis‘.

Montes, was coming off a year of inactivity. Gutierrez, was coming off the biggest upset of the year in New Mexico boxing. There was an anticipation that it would be the most entertaining fight of the night because of Montes’, trash-talking and pre-fight, during-fight and post-fight antics.

The two men exchanged and traded punches for the duration of the match. Ultimately, it was a solid straight righthand from Montes, that put Gutierrez on the canvass. As the referee started his count, Gutierrez stood on extremely wobbly feet. Unable to demonstrate the ability to continue, he was counted out.

Living up to his nickname, Montes then entertained the crowd by summoning his inner Prince Naseem Hamad dance routine.

In his third professional fight, Cabral demonstrated great poise and technical skill against debuter Silva. A left cross floored Silva in the first. It was Silva’s barman-type style that allowed him to have some moments in the middle rounds but Cabral’s power and athleticism was overwhelming.

In the fourth and final round, Silva’s right eye became swollen. Enough punishment was delivered for referee Richard Espinoza to not delay the inevitable. Keep an eye out for Cabral, who is the only fighter to be featured on both Holm-Mathis cards.

In his professional debut, Perez came out swinging and took the first round. His veteran counterpart Gonzales, remained calm and appeared to take both of the middle rounds with technical skill. The final round Perez, won with clean punching.

Many ringside were surprised that a clean-sheet unanimous decision was given to Perez.

John Herrera Comes out of Shell Against Bryan Garcia

The turtle-shelled defense was known as a specialty for Herrera. After it failed him in the first round against Garcia, he came out of his shell to deliver a dazzling performance of technical skill to outbox his opponent, and pull off his first victory in a year and a half.

A pair of debuters opened up the card in an exciting contest. Current professional mixed martial arts fighter Youell, was able to use a series of effective jabs to land a huge left hook which seriously hurt and dropped Sanchez in the first.

Appearing to still be wobbly in the second Sanchez, surprisingly was very aggressive and bullied Youell, around the ring. The constant pressure was enough to force Youell, into exchanges.

A righthand from Sanchez, to the chin followed by a series of shots to the head and body sent Youell, stumbling to the middle of the ring. Sanchez, smelled blood and battered his opponent in a neutral corner, forcing him to go down to two knees.

Sue Fox doesn’t look to happy to be in the picture.
She attend the fight but posts nothing  of her own on WBAN.
Womens Boxing Pro boards is also noticably very quiet.