LAS CRUCES, N.M. – When Abraham “Abie” Han (16-0, 10KOs), steps into the ring to face Bloomfield, New Mexico’s Joseph Gomez (18-5, 8KOs), Saturday night at Sun Bowl in El Paso, Texas, he will officially be making the move up to the middleweight division.

The move from the light middleweight to middleweight was not necessarily one by choice but one out of necessity. “Abie” Han, has been battling high-blood pressure for quite some time. 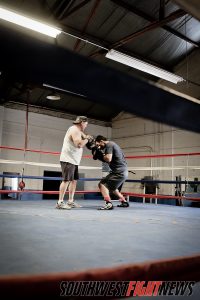 “My body could easily handle the the cut to 154 (pounds) but the doctors said that it wasn’t healthy for my heart,” he said. “I’ve tried several medications but nothing’s really worked.”

His walking-weight is slightly over 160 pounds. Not cutting the extra weight provides less stress on his body and his heart. Despite the additional weight his skills at the new weight-class, however, have not diminished.

“Him and Austin, have really complemented each other,” says Burke. “I think Abie, within another year or two, should be fighting for a world title.”

To prepare for his June 2nd championship fight on Showtime against Devlin Rodriguez, Trout was pushed to the limit by Han, in training.

“Abie Han in my opinion is one of the best middleweights that nobody knows about,” says the 154lb champion Trout. “I know I’m sharp because if I hanging with him, then I can hang with anybody.”

This will be only the third time that Han, will fighting in his hometown of El Paso. The fight is expected to draw anywhere between 20,000-30,000 fans. The card is headlined by the match-up between WBC Middleweight Champion Julio César Chávez and Andy Lee.

There were plans to have the fight moved to another venue by several members of the University of Texas-El Paso administration, who felt that there was imminent danger to the event, due to Chávez’ extraneous ties to Mexican drug lord Joaquín Guzmán Loera or known more by his infamous nickname, “El Chapo”.

Chávez is currently dating the widow of one of Loera’s sons. The threat and danger to the event was immediately discredited and downplayed by El Paso and national authorities. After the assurance, officials at UTEP rescinded their decision of canceling the event.

“To stay here in front of my fans, my family and my close friends, it’s a blessing,” he says. “To fight in front of (many of) them for the first time; to show them what I have, what I can do, it’s awesome.”

Everyone come out and support Abie this weekend at the Sun Bowl!!!!  Hope to see you there 🙂

Wow, I remember watching you guys first start boxing when I would visit my Grandfather. I know he is looking down on you guys and is Proud of the accomplishments the Han’s have done in the ring. Keep it up!