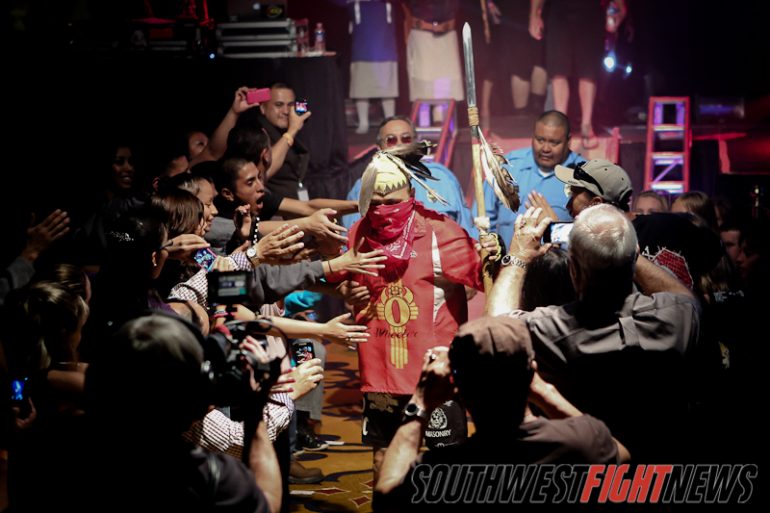 Last night the breathtaking, Inn of the Mountain Gods Resort in Mescalero, New Mexico hosted the Mescalero Warrior Challenge 2 card. The event featured eight bouts with fighters from all over the southwestern United States.

In the main event of the evening Mescalero’s own and WEC veteran Coty “Ox” Wheeler (14-5) took on slick Arizonan Freddie Lux (6-1) in a bantamweight contest. As always Wheeler’s entrance, a traditional Mesalero Apache chant was beautifully performed and sent the pro-Wheeler crowd into a frenzy.
At the onset of the fight both men were very reserved. It was Wheeler that initiated the action but Lux had the successful shots in countering the advances very well with jabs.

Later in the first round as Wheeler attempted a standing guillotine, Lux pulled off a huge body slam that even drew an awe from the Mescalero crowd. The takedown led to a good tussle between the two on the ground but with Lux drawing top position.

Desperately, trying to scramble away from his opponents control, Wheeler gave up his back. It turned out to be a bad decision as Lux administered a rear naked choke to a standing Wheeler, who was forced to tap.

Nick Urso improved to 3-1 in a display of very good ground game ultimately, finishing the contest with a rear naked choke.

In his first fight in over nine months, it only took 17 seconds for Clint Roberts to come out victorious. It did however come at a hefty price. Roberts broke his right hand. Roberts posted a photo of his hand on Facebook with the caption “‎17second knockout, broken hand…worth every second” (Image)

Johann Perez defeated McGurk with a rarely seen knee bar. Earlier in the round McGurk demonstrated incredible resilience as Perez had him in a very deep armbar which broke his elbow. [youtube id=”5Jx8fJ1Wfog” width=”600″ height=”350″]

In his professional debut, El Paso’s Martin Sano engaged in a great ground battle with Adam Gonzales. Both men had several submission attempts throughout the fight that would appear to win it for them. Ultimately, it was a Sano triangle that sealed the deal.

[…] his last outing at the Mescalero Warrior Challenge 2, this past May, Clynes had a very impressive 1st round TKO victory over a tough Andrew […]