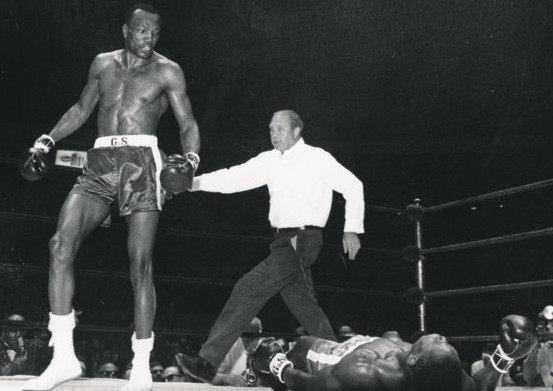 On this date in 1968 Robert Lloyd Foster (56-8-1, 46KOs) or widely recognized as Bob Foster, became New Mexico’s first world champion when he defeated Nigeria’s Dick Tiger by 4th round knockout to claim both the WBC and the WBA Light Heavyweight titles.

Born in Albuquerque, New Mexico on April 27th 1938, Foster fought for much of his career out of Washington D.C. where he was stationed with the United States Air Force. As a member of the Air Force Boxing team he was an amateur standout with over 100 victories.

In 1959, he captured a silver medal at the 1959 Pan American Games in Chicago, Illinois, losing by points to Brazil’s Abraão Francisco de Souza.

The following year Cassius Clay (Muhammad Ali) was given the nod over Foster to represent the US in the light heavyweight division for the Summer Olympics in Rome. Foster was urged by the USA Boxing Team to fight at middleweight but at 6’3’’ it was a stretch to think that Foster could make that weight. He eventually turned down the offer.

In 1961 he made his professional debut against Duke Williams in Washington, D.C. winning by 2nd round knockout.

After seven years as a professional, compiling a 29-4 with three of those loses coming to heavyweights, Foster got his opportunity for the light heavyweight title against Dick Tiger at the Madison Square Garden in New York City.

Foster’s goal of becoming the first boxer to win a light heavyweight and heavyweight championship however came up short. He faced an undefeated Smokin’ Joe Fraizer in 1970 where he lost by 2nd round TKO and two years later lost by 8th round TKO to Muhammad Ali. At that time Ali’s only loss was to Fraizer.

He officially retired in 1978.

During his career Foster made 14 defenses of the light heavyweight belt. The 1975, 1994 and 2002 issues of the The Ring magazine all have Foster ranked in the top five as one of the greatest light heavyweights of all time.

Foster fought a total of four times in Albuquerque defending the his WBC and WBA titles two different times at The Pit.

Why this man does not have a statue outside the building is beyond me.

Check out Chris Cozzone’s interview with Bob Foster. It is the best interview ever done with the former world champ http://www.newmexicoboxing.com/history_newmexico_boxing/bobfoster.html