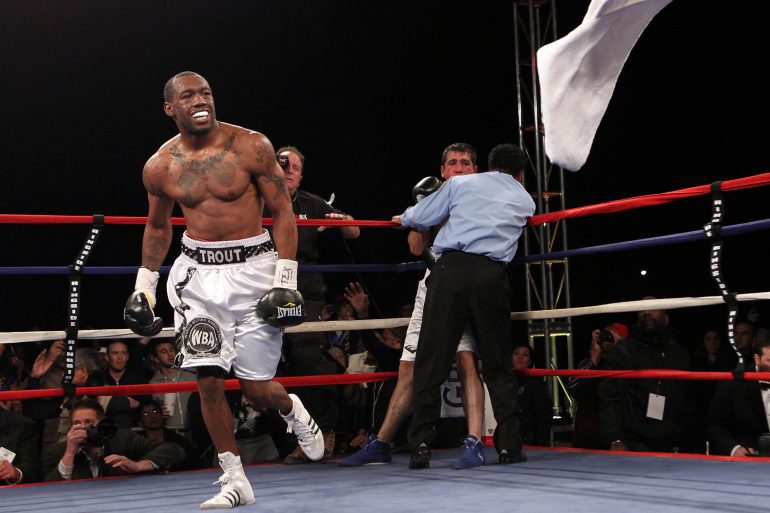 The card features another world championship fight between Antonio Tarver vs Lateef Kayode IBO Cruiserweight title. It will also have arguably two future hall of famers in Tarver, and Ronald “Winky” Wright, who will be facing Peter “Kid Chocolate” Quillin.

This will be the first time in his career Trout will be facing a legitimate top ten fighter in his division. He has had a difficult time getting fights with boxers of a high caliber since winning the regular version of the belt against Rigoberto Alvarez, older brother of the WBC champion in his same weight-class, Saul “Canelo” Alvarez. Floyd Mayweather Jr. won the rights to the full version of Trout’s WBA title by defeating Miguel Cotto earlier this month.

Trout’s patience for a world-class caliber opponent would eventually pay off.

This past March the under-publicized successful career of Trout took a fortuitous turn with a phone call from Sam Watson, an associate of boxing powerbroker Al Haymon.

Haymon is responsible for guiding the recent careers of Floyd Mayweather, Andre Berto, and originally started his boxing advising career with the late great Vernon Forrest.

“(Sam) called me and asked ‘Do you know who Al Haymon is?’, I was like ‘Yeah of course I know who he is!’”, recalls Trout. “I met Haymon in Houston (at the Erik Morales/Danny Garcia light welterweight title fight) and a couple of weeks later we signed a contract.”

Do a google search of Haymon. You cannot find much, can you? Haymon is a manager, an adviser; a powerbroker in boxing. He is rarely seen or even photographed but people talk about him all the time; the Keyser Söze of boxing (sans the killing) he gets things done on his accord and to his liking.

As HBO commentator Max Kellerman once said about Haymon, “There’s backlash in boxing, I think, against Al Haymon fighters because. He seems to wield an influence out of proportion with others in boxing.”

And Trout is clearly benefitting from it.