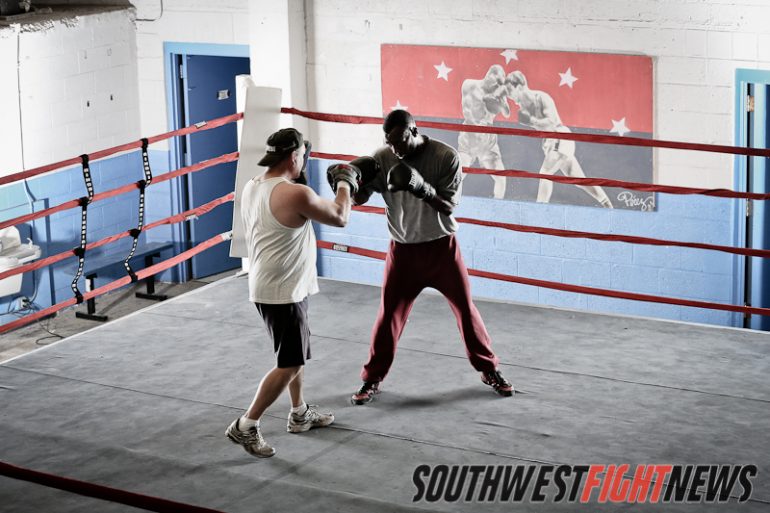 The building that houses the gym at 700 North Solano, has always been a home for fighters even since its inception in the 1950‘s when it was first used as an armory for U.S. Army tanks.

With the help of Ben “Chico” Segura, who in 1971 first established the PAL program in Las Cruces, Louie’s father Sammy Burke, former police detective Joe Bob Sellers and boxing trainer Larry Renio, 20 years-ago the building was converted into a boxing gym making it a haven for troubled teens in the southern New Mexico.

It was not just training ground for teens but for professional boxers as well. Former WBA World Lightweight champion Ray “Boom Boom” Mancini trained in the building.

A former professional boxer himself with a record of 19 and 3 with 12 knockouts as a product of the gym, Louie Burke challenged some well known fighters, including former three-time world champion Hector “Macho” Camacho. Burke even defeated world renown boxing trainer Freddy Roach twice, earning him the “ESPN Television” title belt in one of those victories.

In 1996, a scrawny, big headed, 10-year-old black kid by the name of Austin, walked into the predominantly Caucasian and Latino boxing gym on the advice of his mother.

“Austin was a pretty timid kid; very quite. I don’t know what happened,” says a kidding Burke.

The only other African-American at the gym was a trainer by the name of Harvey Shaw. The late Baltimore Hall of Famer would take Trout under his wing and introduce him to the sport of fisticuffs.

“I never felt any different. They helped me as a team but oooh I got to hear all the little racial jokes that (the other kids at the gym) could not just wait to try out,” Trout reminisces.

In 2002, a cocky football player at a local high school was beating up everyone in the team’s locker-room at boxing and heard of Trout’s reputation as a talented fighter and challenged him.

That sparring match was a one sided affair with Trout coming out victorious.

The punishment delivered to Sijuola “Siju” Ade Shabazz that day would not just turn he and Trout into best friends but would lead Shabazz to start training at the gym and eventually capture the National Golden Gloves and National PAL Championships. He would also become one best amateurs in recent New Mexico boxing history.

Along with Trout and Shabazz the gym is also building quite a stable for itself with Ayanna Vasquez, a nine-time national boxing amateur champion and National PAL Champion, possibly the greatest amateur boxer in New Mexico history, and Top Rank signee Abraham “Abie” Han (15-0,10KO), an undefeated middleweight from El Paso, Texas.

Currently, Shabazz and Han are assisting Trout prepare for the biggest bout of his career. A 12 round contest for his WBA crown against a very talented Delvin Rodriguez set to take place June 2nd at the Home Depot Center in Carson, California.