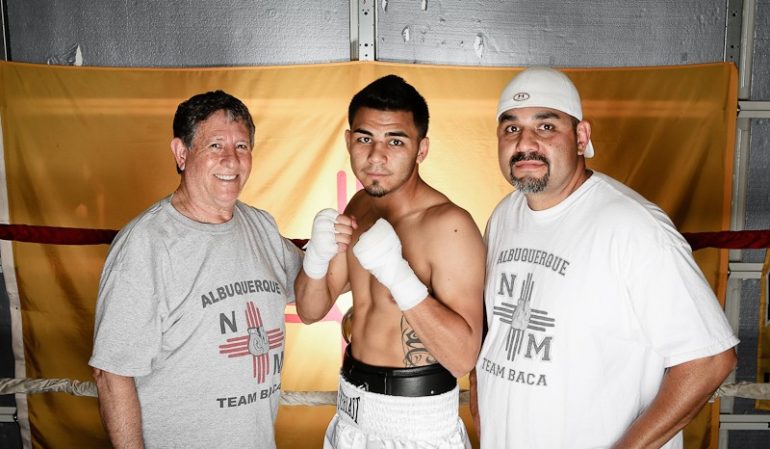 It’s been pretty hard for us to focus on SWFN lately. The spring has brought lots of projects and things that steal time and motivation from us. The day jobs sap a lot of our energy too as we’re not getting paid for SWFN yet, heck sometimes we don’t even get thanked! We considered hanging it up and bailing on the site, or at least taking a long break; then a great evening with an incredible local fight family, the Baca’s, quickly reminded us why we do this…for the fighters. The passion and zeal the Baca’s have for this sport, helped to rekindle ours. These folks opened their home and lives to us for a night, and even fed us the most delicious enchiladas I’ve had in a long time. Take note, the bar has been raised!

Matt Baca trains with his father and coach David Baca, and Luis Chavez. While most other teens are still asleep, Matt is up at 5:30 AM for his morning run before school, then trains 3-5 nights a week after school, in what has to be one of best home gyms I’ve seen in a long time.  Matt’s whirlwind  training schedule plus the daily routine of school is a testament to a level of commitment not shown by most guys his age to fighting, or anything else for that matter. With his first professional fight ending in a tremendous knockout, Matt Baca’s future looks good. Be sure to catch his second professional fight on the Golden Girl Productions card on April 28th 2012 at Santa Anna Casino.

Heather Jo Clark on Being a Pro at Everything (VIDEO)