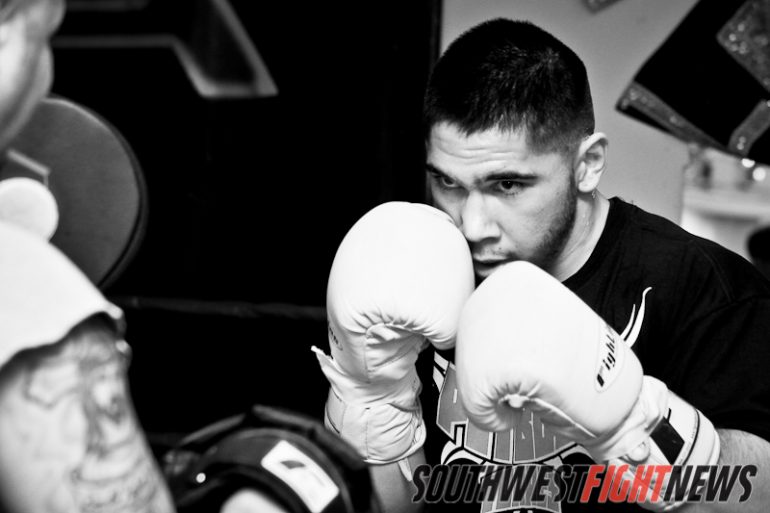 Johnny Tapia is a  household name in in the world of boxing; he has now made a seamless transition from fighter to coach, trainer, and promoter. The March 31st “The Uprising” card at the Hard Rock Casino brings the latest production for Tapia.  A few changes to the lineup on the card are still underway due to some injuries, we’ll keep you updated on the changes.  SWFN attended an open workout where fighters from team Tapia worked out, and hit mitts with Johnny.

The large media turnout made things a bit cozy, but fighters weren’t phased by the lack of space and continued to workout as normal, hitting bags, and jumping rope; with their headphones on, they remained focused like no one was there.  I stole a word with Josh “The Pit bull” Torres as he wrapped his hands in preparation for hitting mitts with Johnny Tapia. I asked the usual lame question “how are you feeling Josh?”  his answer made my lame question much more interesting; “I’m so ready for this fight, I’ve been training for so long putting myself through all this pain, and now I’m ready to put someone else in pain.”

Johnny Tapia arrived with hugs and handshakes for the packed house; he quickly went right to work, chomped on his signature straw, and donned the mitts.  Josh Torres was up first for his mitt session.  Johnny was loud and vocal with his coaching as the two hit mitts.  Josh landed several Mack truck hooks that garnered lots of  “Nice Josh” from Tapia, as well as reminders about hand position and head movement.  Tapia didn’t slow down much after session with Josh, and shouted across the gym to Archie Marquez, “Stay loose Archie, you’re next” and quickly moved into the next session. Thanks to Johnny and the fighters for letting us invade their gym for a glimpse into their training.