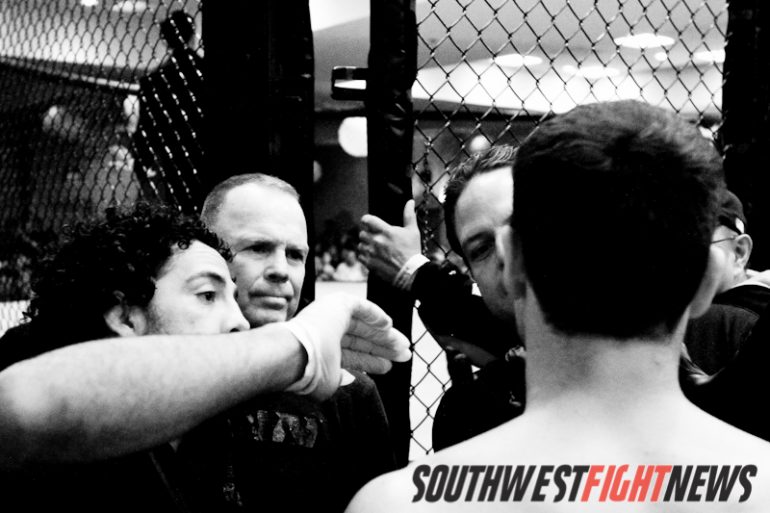 Southwest Fight News loaded up the energy drinks and beef jerky and hit the highway for the short road trip to Gallup New Mexico, to cover the March Madness event by T2 promotions. We had an absolute blast at the event and the trip was well worth it.We even overstayed our welcome, stealing wifi, way past midnight, at a McDonald’s in Grants to get it all out onto paper. The fights were fantastic and some of these amateurs have a bright future ahead of them. We setup a huge photo booth and had fun taking photos of the fighters before their fights as well as after. It feels good to support the sport at the grass roots level. We encourage everyone to come out to the smaller shows.

Fighters and they’re teams came from all over the state and some from out of state, to compete.  Mean1MMA, Bio Dog, Black Water and Perez Fighting Systems were just a few of the Gyms represented. T2 productions did a great job at organizing a card with 15 fights. The card was as follows:

Brandon Lopez VS Andres Velarde:
Lopez defeated Velarde with a guillotine choke in the first round, after a back and forth ground battle.

Brandon Aragon VS Malcom Mitchell:
This fight was a war of attrition. Mitchell seemed to be getting the better of Aragon in the striking department, while Aragon had the better of the ground game with several arm bar attempts.  Round 3 ended right at the opening bell, with Mitchell’s right hand instantly finding a home and finishing Aragon by TKO.

Stacy Cly VS Virgilio Pinto:
Pinto was the more technical fighter, but the brawler style of Cly would win out with a TKO in the first round

Brent Brown VS Richard Becente:
In another first round finish, Brown choked out Becente for the W in the first round

Joseph Hartnell VS Brandon Watts:
Hartnell had an early take down and Watts came close with a guillotine, but it would be a hard straight right hand from Hartnell that ended things with Watts TKO’d

Tally Touchine VS Nathan Tsosie:
This one ended early in the first round when Touchine grabbed a tight arm bar on Tsosie. Nathan Tsosie was tough and refused to tap. The referee stepped in with a stoppage before his arm snapped.

Steve Fierro VS George Clynes:
Clynes put on a kick clinic in this three rounder, landing hard kicks to the head, body, and legs of Fierro. Steve Fierro shot multiple take down attempts but was stuffed by the sprawl of Clynes. Foerro was rocked but never went out. Clynes got the nod from all three judges for a unanimous win.

Rudy Kennedy VS Falon Ring:
The opening bell rang and Falon Ring came running across the 32 foot cage with a flying front kick to the face of Kennedy. The excitement didn’t stop there, Ring scored a take down with fierce punches from outside guard. When Kennedy tried to escape, Ring transitioned into a tight textbook triangle choke, submitting Kennedy, all this in the first two minutes of the first round.

Angelo Lincoln VS Virgil Begay:
The first round of this fight was a slug fest with Lincoln landing slightly more hooks.  The second round went to the ground with Lincoln sinking a deep rear naked choke for the win.

Adrian Yazzie VS Steve Garcia:
Garcia came out very aggressive landing kicks and elevation change combos. When Yazzie missed a take down attempt Garcia capitalized and took Yazzies back and sunk a rear naked choke for the win.

Levi Lucero VS Juan Aranda:
Lucero landed an early takedown that was quickly reversed by Aranda where he rained down hammer fists to the face of Lucero. In the second round Lucero lands a big right hook that appeared to rock Aranda. Things went to the ground where Aranda was able to secure an arm bar for the victory.

Manny Godinez VS Josh Moreno:
This was the only Heavy weight fight of the night. The first round was mostly stand up with Godinez landing more. The second round had lots of take downs and submission attempts by both fighters, as well as a nasty eye gouge on Moreno. The third round had Godinez slightly more tired than Moreno and Moreno getting the better of him. The split decision went to Moreno.

Andrew Tenneson VS Daniel Mendez:
Tenneson made quick work of Mendez with a huge judo style takedown, once on the ground Tenneson instantly transitioned to an arm bar, submitting Mendez for the win.

Great coverage guys.  Wish we could have been there!