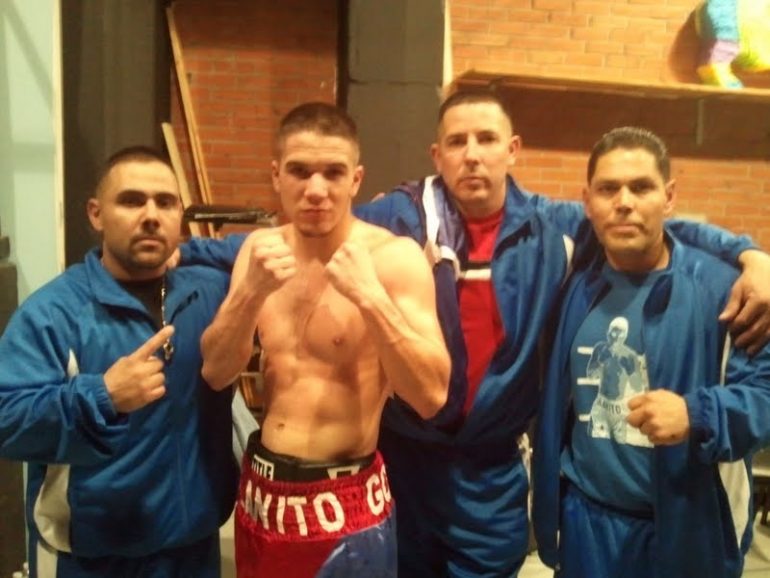 In their first at bat as a professional boxing promotion, last night, Chavez Promotions hit a home run with their Warehouse Rumble card. A very entertaining set of seven bouts thrilled fans at the sold out YDI Wool Warehouse in Albuquerque, New Mexico.

“Wow! For our first event it’s amazing how the fans and the fighters responded tonight,” said matchmaker and event coordinator Martin Narro.

In the main event, Albuquerque’s former amateur standout Yoel Gonzalez, outboxed a reserved John Herrera (1-2-1) from Roswell. In the first round Gonzalez put on a boxing exhibition displaying veteran footwork and angular punching.

Occasionally, Herrera would come out of his turtleshell defense and would land effective blows; even blooding Gonzalez nose early on.

The rest of the bout had Gonzalez figuring out that uppercuts and shots to the left side of Herrera’s body would break the “Joshua Clotteyesque” defense down.

“I haven’t bled in five years so, that made it a little hard for me,” says Gonzalez. “He was a great defensive fighter but it was simple enough to outpoint.”

In the co-main event of the evening Los Lunas’ and Rosales’ Brandi Montoya (2-2) avenged a loss from the amateurs against a gritty Amber Brown (0-1) of Fit NHB in Albuquerque.

From the onset Montoya used her much improved combinations, lateral body and head movement to out slick Brown.

In her first professional fight Brown, had her moments as she would force Montoya to engage in exchanges.

“It feels awesome! One down; now my debut redemption (is next),” says Montoya of her victory and of the upcoming rematch she has against Santa Fe’s Natalie Roy (3-0) on April 28th. The two women participated in one of the most debatable decisions of 2011 in what was Montoya’s debut and the first of her two professional losses.

In the upset of the night, Albuquerque prospect Leonardo Sanchez (2-1) lost by unanimous decision to Jaime Gutierrez (4-5) of Los Mochis, Mexico.

Gutierrez was able to keep the Albuquerquean at bay with his arm length advantage.

His technical skill and defense frustrated Sanchez as the latter was unable to establish a rhythm or many land combinations.

Chavez Promotions hopes to be put on boxing events as often as possible.

“Watch out for us. We have another event in about six weeks or so. Hopefully they’re all good as this one,” said Narro.

FULL RESULTS (All bouts were 4 rounds)