KOTC: Who is Chris Culley? 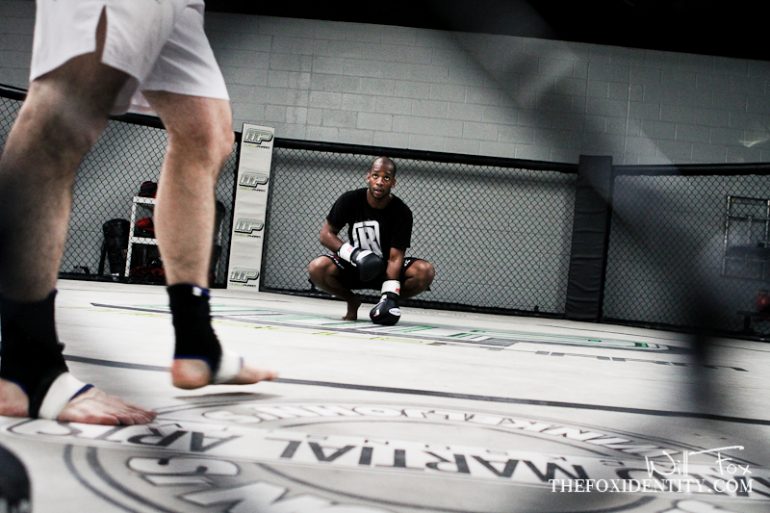 Chris Culley(12-8-0) will be squaring up against Albuquerque FIT NHB fighter Donald Sanchez on the King
of the Cage “Night Stalker” card on January 14th. Southwest Fight News caught up with him at Jackson-Winkeljohn
MMA to talk about the upcoming fight, his training, and the current state of his game.

Training:
Culley trains in the evening at Millenia MMA Training Center in Rancho Cucamunga California, in
the mornings at Joe Stevenson’s Cobra Kai in Victorville, then peppers in some Jiu Jitsu with Marcelo
Mafra. Culley has had the same kickboxing coach, Craig Buchanan, since age 11. This is a serious
training regiment that gets even better when his plane lands in Albuquerque. Chris first began training
at Jackson-Winkeljohn’s in Albuquerque when it was recommended by Joe Stevenson. After meeting
and hitting it off with Isaac Vallie-Flagg (another foreign gym exchange student) at Cobra Kai, he now
had a place to stay in NM. Chris has phenomenal kick boxing skills, but all Chris’s coaches agreed that
Jackson-Winkeljohn’s would be a great place for him to continue rounding out his skill-set. He’s made
great advances in his Jiu Jitsu and wrestling. Chris loves what he calls the “fighters spirit” that hangs
heavy in the air here in Albuquerque, he can’t help but feel it “soak in” just spending time here. He
trains here before any major fight. It’s no secret that our elevation is beneficial, and plays a key role in
this fighters awesome cardio, he’s made several trips with the Jackson-Winkeljohn clan up the trail of
tears. He loves training in a facility surrounded by champions and contenders, it forces him to elevate
his training, and keep his skills “next level”.

Skills
In 2010 Culley was on a 5 fight winning streak. 2011, while not as blistering as 2010, brought great
numbers as well with Culley winning 3 of his five fights. A look at Culley’s record via Sherdog.com
showcases his striking skills with wins by KO and TKO, but even more wins by decision. Most fighters
like to finish things and keep it out of the judges hands, which Culley is a fan of as well, but one of his
weapons is his freakish cardio. He’s not afraid to drag opponents into the deep water of late rounds,
where he’s comfortable tiring them out and commanding decision victories. While he’s always working
on diversifying his skills, Culley is a striker at heart and likes to keep the fight there; but when things
go to the ground, his cardio gives him the fuel he needs to not just last, but to get back up where he
prefers the battle to be.

Back to the Lab
Chris doesn’t take losses lightly, especially the successive variety. He’s never comfortable with any
loss, the two he was handed last year made him realize fighters had figured him out so to speak.
Opponents started to take him to the ground to neutralize his striking, so it was off to NM to learn from
the best and keep them guessing. Multiple rematches with fighters that had beat him before, ended with
wins. These rematches were all the proof Culley needed that the changes he was making in his training
and fighting style, both in New Mexico and back home, were working.

The Matter at Hand
Chris isn’t your average trash talking opponent, he’s got a lot of respect for Donald Sanchez and speaks
highly of him. He’s been following Sanchez for quite some time and is honored to fight him in what
he feels is one of the biggest fights in his career. With admiration also comes a lot of insight into
Sanchez’s style and game plan. Everyone knows Donald Sanchez is a great wrestler, but Culley also
mentions that Sanchez’s kick boxing and striking are dangerous. “Sanchez is a killer and he breaks
peoples will” Culley says, “ but that’s the kind of fight I like”. He plans to match Sanchez’s pressure

and stay right in his face, because he knows Donald will be in his; he also plans to surprise Donald
early and often. Chris loves the level of competition at KOTC but feels the winner of his upcoming
fight, will inevitably be the KOTC bantamweight belt holder. Culley predicts his fight will be a barn
burner, and regardless of the outcome, looks forward to a beer with Sanchez when the dust settles.

Humble
Chris is very thankful for the support of his teams at Millenia MMA, Jackson-Winkeljohn, Cobra Kai,
Marcelo Mafra, fight fans and of course his fiance who will be traveling to NM for the fight.

Tickets are still available for the Buffalo Thunder “Night Stalker” 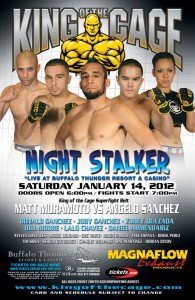