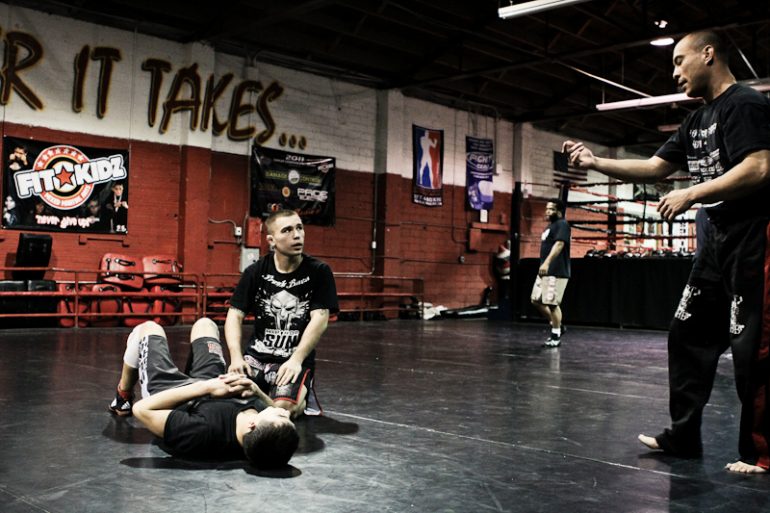 The last year has had its ups and downs for Sanchez, winning two and losing two fights. Unsurprisingly, both wins were by submission in the first round as Sanchez is well-known for his dangerous ground-game, with 10 of his wins coming by submission. But Sanchez is desperate for rematches with both of those losses.

He was submitted in the second round by Hatsu Hioki (25-4, Alive), whom he faced in Japan at Shooto – Tradition 2011, with less than two-weeks’ notice. Hioki recently made and won his UFC debut, and Sanchez burns for the chance to face him again.

The other loss was a gut-wrenching split-decision against Jeremy Spoon (12-0, Apex BJJ), a few months later, at King of the Cage “Overdrive”. That win earned Spoon the KOTC Bantamweight title.  Spoon recently made and won his Bellator debut, and once again Sanchez yearns to rematch and finish Spoon.

Sanchez, like all other FIT NHB fighters, is completely devoted to his gym and his coaches, “other fighters cross-train at different gyms; I want to show people that, here at FIT, you get everything you need in one place.  In my eyes, it’s the best gym in the world.”

A few months ago, the FIT NHB family increased to include sister gym, Power MMA, in Gilbert, AZ, home to UFC fighters Aaron Simpson, Ryan Bader, and CB Dollaway.  The relationship was forged when Power MMA management asked Tom Vaughn, owner and head coach of FIT NHB, to become the head coach of that facility also.

Now, the fighters at each gym consider each other teammates and several have made the trip to train at each other’s gyms. Sanchez couldn’t be happier about the arrangement.

“I love it! Great training sessions, great people, we just clicked.  They teach us some things, and we teach them some things.”

Sanchez is excited to face Culley at the 150-pound catchweight match.

“I know he wants my head.  He’s gonna bring it; I hope he does.  I want a good fight, I want to entertain my fans, and show them what type of fighter I am.”

Culley, who has been cross-training for this camp at Jackson-Winkeljohn MMA, has nothing but respect for Donald, and has been training harder than ever for what he considers one of the biggest fights of his career.

Five of Culley’s wins are by KO, and 6 by decision, but Sanchez has never been knocked out, and has gone the distance himself several times, with 4 of his wins by decision.

Following this fight, Sanchez has aspirations not only to get his Bantamweight title back, but he wants to “climb the ladder”, so to speak.

“I just want to fight the best in the world, and prove not only that I am the best, but that my gym, my team and my coaches are too.”