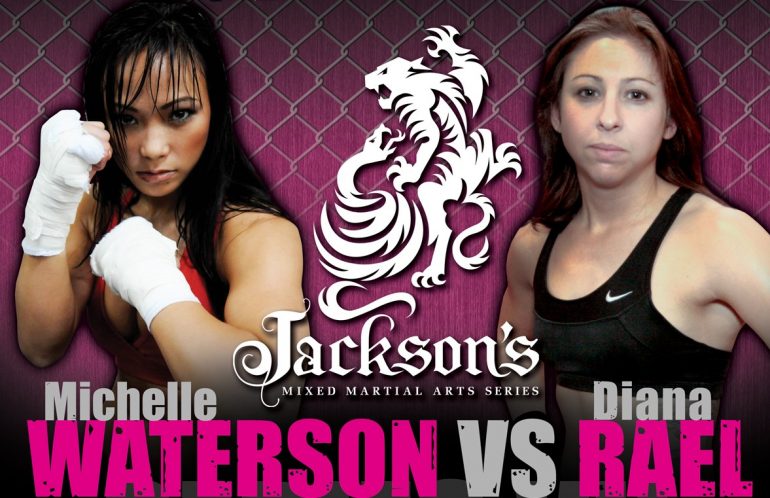 Main event Michelle Waterson (8-3) vs.  Diana Rael (3-1) at 105lbs.
Michelle Waterson taking on the talented Diana Rael in the main event of this stacked Jacksons MMA Series fight card. Waterson and Rael are flyweight fighters and a fast paced firework-filled show is expected. Rael recently took out Chavez Dojo’s Angelica Chavez, utilizing a variety of techniques to upset Chavez before her own hometown crowd.  It could be said that Rael’s roar silenced Chavez’s fans and brought her to a new level of respect in the MMA fight world.

For Waterson, this is the first fight back since her daughter’s birth. Before the time off, Waterson put together a highlight reel in her last fight which culminated with a flying arm bar finish on Rosary Califano.  Before that Waterson scored an  impressive TKO stoppage over the experienced Masako Yoshida.  Waterson will be looking to extend her winning streak when she steps in the cage to face Rael  at the Jackson’s Series in January. It is anticipated that Waterson’s diverse striking and fluid ground game will provide a strong challenge to Rael’s pace, the only thing we know for sure is that this will be an exciting fight for as long as it lasts.

The co-main event Henry Martinez (6-1) vs. Ali Hanjani (2-1) at 155lbs.
The co-main event of this Jackson’s Series will feature wrestling standout Henry Martinez versus rising prospect Ali Hanjani.  Hanjani has demonstrated strong ground skills over his last four professional fights, along with a willingness to stand and bang with his opponents. Hailing from the Serial Boxe gym in Colorado, this isn’t Ali’s first fight in front of an Albuquerque crowd. In August of 2011, Ali choked out the then undefeated Sean Spencer via triangle choke in the first round of the Genesis event at the MMA Fight Pit in Albuquerque.

Martinez is a well accomplished Division 1 wrestler and ju-jitsu standout from Espanola, NM. Fighting out of Jackson / Winkeljohn MMA, Martinez has proven to be a well-rounded fighter consistently throughout his last seven professional fights. Martinez was recently awarded a black belt from Tait Fletcher at the Undisputed MMA gym in Santa Fe, and Martinez will not hesitate to take this fight to the ground with Hanjani. We can expect this to be an exciting match and look out for Martinez’s hard hitting ground and pound to make a decisive the difference in this fight.

Jodie Esquibel vs. Amy Riehle at 105lbs,
Fresh off her controversial home town decision loss to Ji-Hyun Park for IFBA Straw weight Title on this December in South Korea, Jodie Esquibel is in fantastic shape and ready to transition her training back to MMA for this fight. Esquibel has an extensive boxing and kickboxing background, which she utilized in her first MMA win over Brittany Horton at Jackson’s MMA Series 4.

Riehle is coming of a 2010 loss to Casey Noland. This will be Riehle’s first fight at (what is the weightclass?), cutting down from the heavier flyweight weight class where we have seen her fighting up until now. Riehle is fighting out of Arevalo Fight Academy in Lake Havasu City, Arizona, and her 5’7″ frame will give her a height and reach advantage over the 5’1″ Esquibel. But if Esquibel can utilize her world class striking, it may be a short night for Riehle.

2012 King of the Cage Schedule